Only on the Weekends (Hardcover) 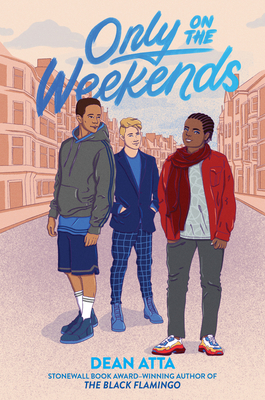 From the Stonewall Award-winning author of The Black Flamingo comes a romantic coming-of-age novel in verse about pursuing the love we know we deserve. The ideal next read for fans of Kacen Callender, Elizabeth Acevedo, and Becky Albertalli.

Mack is a hopeless romantic—likely a hazard of growing up on film sets thanks to his father’s job. He has had a crush on Karim for as long as he can remember, and he can’t believe it when gorgeous, popular Karim seems into him too.

But when Mack’s father takes on a new directing project in Scotland, Mack has to move away, and he soon discovers how painful long-distance relationships can be. It’s awful to be so far away from Karim, and it’s made worse by the fact that Karim can be so hard to read.

Then Mack meets actor Finlay on set, and the world turns upside down again. Fin seems fearless, and his confidence could just be infectious.

Award-winning author Dean Atta crafts a beautifully nuanced and revelatory story in verse about the exquisite highs and lows of first love and self-discovery.

Dean Atta’s poems deal with themes of race, gender, and identity. He regularly performs across the UK and internationally and his work has been shortlisted for the Polari First Book Prize and appeared on MTV and BET. The Black Flamingo is his debut YA novel. You can find him online at www.deanatta.com.

“This slow-burn novel in verse is a raw, real, deep dive into the messy internal world of its relatable main character. Readers will become attached to Mack and will want to know exactly how this love triangle plays out.”  — School Library Journal

"Atta’s story uplifts as it informs and entertains as it affirms.” — Publishers Weekly (starred review)

“A triumphant and emotional story about standing up for and embracing oneself that readers of any orientation and ethnicity will relate to.” — School Library Journal (starred review)

“Winner of the 2020 Stonewall Book Award, this British verse novel by a poet and drag performer offers a welcome exploration of the intersections of race, gender, and sexuality…. [A] memorable YA debut.”  — Horn Book Magazine

"Captures its audience from the very first page, with verse poetry that grows and matures alongside its protagonist…. Michael’s internal dissonances are relatable on the most human level, leaving readers in a state of ultimate euphoria when he finally finds family in the Drag Society.”  — ALA Booklist

“A novel in verse, Michael’s tale explores how our identities and our discomfort mold us. Winner of the prestigious Stonewall Book Award, Atta’s thick debut novel is a fast read about a young man learning to feel comfortable in his own skin.” — them

"The Black Flamingo is an essential addition to the canon of queer coming-of-age stories. Dean Atta has gifted us with words that are lyrical, hilarious and intimate. I’m obsessed with this book and you will be too." — Abdi Nazemian, Stonewall Honor-winning author of Like a Love Story