Before They Are Hanged (The First Law Trilogy #2) (Paperback) 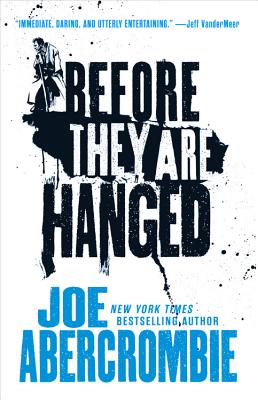 This is book number 2 in the The First Law Trilogy series.

Superior Glokta has a problem. How do you defend a city surrounded by enemies and riddled with traitors, when your allies can by no means be trusted, and your predecessor vanished without a trace? It's enough to make a torturer want to run -- if he could even walk without a stick.

Northmen have spilled over the border of Angland and are spreading fire and death across the frozen country. Crown Prince Ladisla is poised to drive them back and win undying glory. There is only one problem -- he commands the worst-armed, worst-trained, worst-led army in the world.

And Bayaz, the First of the Magi, is leading a party of bold adventurers on a perilous mission through the ruins of the past. The most hated woman in the South, the most feared man in the North, and the most selfish boy in the Union make a strange alliance, but a deadly one. They might even stand a chance of saving mankind from the Eaters -- if they didn't hate each other quite so much.

Ancient secrets will be uncovered. Bloody battles will be won and lost. Bitter enemies will be forgiven -- but not before they are hanged.


For more from Joe Abercrombie, check out:

Joe Abercrombie is the New York Times bestselling author of The Heroes, Best Served Cold, Red Country and the First Law trilogy: The Blade Itself, Before They Are Hanged, and Last Argument of Kings. He is a full time writer, and occasional freelance film editor, who lives in Bath, England with his wife and three children.

"Bold and authentically original."—Jeff VanderMeer on The Blade Itself

"Abercrombie has written the finest epic fantasy trilogy in recent memory. He's one writer that no one should miss."—Junot Diaz

"If you're fond of bloodless, turgid fantasy with characters as thin as newspaper and as boring as plaster saints, Joe Abercrombie is really going to ruin your day. A long career for this guy would be a gift to our genre."—Scott Lynch, author of The Lies of Locke Lamora on The Blade Itself

"Compelling characters, a complex plot, and style to burn."—Strange Horizons on The Blade Itself

"Magnificent, richly entertaining"—Time on The Heroes

"Imagine The Lord of the Rings as directed by Kurosawa."—Lev Grossman, Wall Street Journal on The Heroes

"[Abercrombie has] begun breaking his own rules. And succeeding wildly at it. ... Rarely has Abercrombie had so much fun while rollicking through his colorful cast's foibles and witty dialogue - and rarely has he dished out so much straight-for-the-heart poignancy."—The A.V. Club

"Exhilarating... Abercrombie's knack for wit and grit holds your attention throughout, and his eye for character means that there's heart as well as muscle."—SFX (UK)

"Lord of the Rings as directed by Kurosawa."—Wall Street Journal on The Heroes