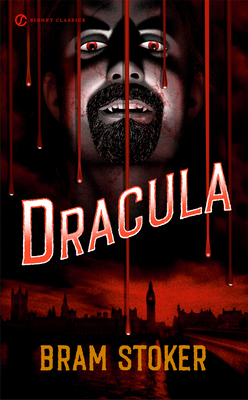 Bram Stoker’s gothic horror masterpiece pits good against evil and life against death, all under the thrall of the original vampire....

“Listen to them—the children of the night. What music they make!”

He is a creature of darkness. His face deathly pale, his eyes ablaze with the fires of hell. He has been dead for centuries, yet he may never die. He waits in his crumbling castle in the mountains of Transylvania, as his prey draws closer and closer to destruction....

Here begins one of the most celebrated horror stories in history, the tale of an undead monster who craves the blood of his victims and relishes his dominance over mankind. With its delicious mix of action, suspense, and looming dread, Bram Stoker’s Dracula has terrified and inspired readers for more than a hundred years.

Bram Stoker (1847-1912) was born in Dublin. After attending Dublin University, he spent ten years as an Irish civil servant, trying to keep up his writing in his free time. By 1871, he had become the drama critic for the Dublin Mail and had gained experience as a newspaper editor, reporter, and short story writer. In 1878 he became the personal assistant to Sir Henry Irving, the foremost Shakespearean actor of his day, accompanying him on tours and managing Irving’s theater. After Irving’s death in 1905, Stoker worked on the literary staff of the London Telegraph. Dracula, his most famous work, was published in 1897.

Leonard Wolf is a teacher, an author, a leading translator of Yiddish literature, and an award-winning authority on Gothic literature and film. He has edited such volumes as Wolf’s Complete Book of Terror and Blood Thirst: 100 Years of Vampire Literature.

Jeffrey Meyers has published forty-five books and 630 articles on literature, film, and art. A distinguished biographer, he’s written lives of Hemingway, Lawrence, Conrad, Poe, Fitzgerald, Frost, Orwell, Bogart, and Modigliani. He’s had twenty-five works translated into twelve languages and published on six continents. He is one of ten Americans who are Fellows of the Royal Society of Literature, and in 2005 he received an Award in Literature “to honor exceptional achievement” from the American Academy of Arts and Letters.

“Stoker gives us the most remarkable scenes of horror...each is unforgettable, and no movie has quite done justice to any of them.”—Stephen King