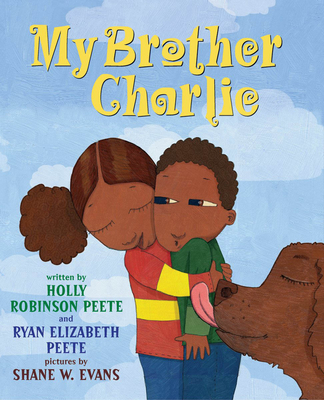 From bestselling author and actress Holly Robinson Peete--a heartwarming story about a boy who happens to be autistic, based on Holly's son, who has autism."Charlie has autism. His brain works in a special way. It's harder for him to make friends. Or show his true feelings. Or stay safe." But as his big sister tells us, for everything that Charlie can't do well, there are plenty more things that he's good at. He knows the names of all the American presidents. He knows stuff about airplanes. And he can even play the piano better than anyone he knows.Actress and national autism spokesperson Holly Robinson Peete collaborates with her daughter on this book based on Holly's 10-year-old son, who has autism.

RJ Peete wrote this book with his mother, Holly Robinson Peete, to help share awareness about autism with other children who have been touched by it in some way. RJ and his twin sister, Ryan, travel with their mom, speaking to children, families, and educators about their experiences growing up together. The Peetes live in Beverly Hills, California.

Ryan Elizabeth Peete and Rodney Peete, teenage twins, wrote this book with their mother Holly Robinson Peete to help share awareness about autism with other children who have been touched by it in some way. Ryan and Rodney travel with their mom speaking to teens about their experiences growing up together. The Peetes live in Beverly Hills, California.

Shane W. Evans is the illustrator of many terrific picture books, including Nobody's Gonna Turn Me Round by Doreen Rappaport, Coretta Scott King / John Steptoe New Talent Award winner The Way a Door Closes by Hope Anita Smith, Take it to the Hoop Magic Johnson by Quincy Troupe, The Shark series by Jean Marzollo, and When Gorilla Goes Walking by Nikki Grimes. His accolades range from being honored by First Lady Laura Bush at the 2002 National Book Festival, to The Boston Globe-Horn Book Award and The Orbis Pictus Award for Outstanding Non-Fiction for Children.

A multi-talented artist and designer, Shane W. Evans has also worked as an illustrator, graphic designer and web designer for a diverse group of clients, including Nike, the FDA, the Kansas City Jazz Museum, and the Kansas City International Jazz Festival.

Evans studied at Syracuse University School of Visual and Performing Arts. He graduated in 1993 and began traveling the world. His work is influenced by his travels to Africa, South America, Asia, Europe, the Caribbean, and throughout the United States.

Firmly believing in education and creative development for all people, Evans has produced a unique presentation designed to share his gift with all ages, cultures, ethnic groups, and backgrounds. His presentations and workshops are specifically tailored to each audience and combine storytelling, art projects, and slide presentations from his own work and world travel.