A Lesson in Vengeance (Hardcover) 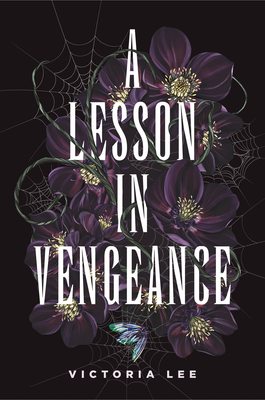 A dark, twisty thriller about a centuries-old, ivy-covered boarding school haunted by its history of witchcraft and two girls dangerously close to digging up the past. The dangerous romance and atmospheric setting makes it a perfect read for fans of dark academia.

Felicity Morrow is back at the Dalloway School. Perched in the Catskill Mountains, the centuries-old, ivy-covered campus was home until the tragic death of her girlfriend. Now, after a year away, she's returned to finish high school. She even has her old room in Godwin House, the exclusive dormitory rumored to be haunted by the spirits of five Dalloway students—girls some say were witches. The Dalloway Five all died mysteriously, one after another, right on Godwin grounds.

Witchcraft is woven into Dalloway's past. The school doesn't talk about it, but the students do. In secret rooms and shadowy corners, girls convene. And before her girlfriend died, Felicity was drawn to the dark. She's determined to leave that behind now, but it's hard when Dalloway's occult history is everywhere. And when the new girl won't let her forget.

It's Ellis Haley's first year at Dalloway, and she has already amassed a loyal following. A prodigy novelist at seventeen, Ellis is a so-called method writer. She's eccentric and brilliant, and Felicity can't shake the pull she feels to her. So when Ellis asks Felicity to help her research the Dalloway Five for her second book, Felicity can't say no. Given her history with the arcane, Felicity is the perfect resource.

And when history begins to repeat itself, Felicity will have to face the darkness in Dalloway—and herself.

Victoria Lee grew up in Durham, North Carolina, where she spent her childhood writing ghost stories and fantasizing about attending boarding school. She has a Ph.D. in psychology, which she uses to overanalyze fictional characters and also herself. Lee is the author of A Lesson in Vengeance as well as The Fever King and its sequel, The Electric Heir. She lives in New York City with her partner, cat, and malevolent dog. Visit her online at victorialeewrites.com and follow her on Twitter and Instagram @sosaidvictoria.

"A Lesson in Vengeance is at once dark and mesmerizing, with spine-tingling suspense and mind-bending twists. I loved it."—Kara Thomas, author of The Cheerleaders and That Weekend

"A smart, layered, thought-provoking thriller about female desire and the intimacy of violence.”—Ava Reid, author of The Wolf and the Woodsman

"Darkly radiant and brilliantly wicked, A Lesson in Vengeance is a sharp dissection of queerness, ambition, and the forbidden luster of the occult. This book will possess you from first pages to its haunting, final words.”—Ryan La Sala, author of Be Dazzled and Reverie

“A Lesson in Vengeance is the witchy boarding school story I always knew I wanted, a gorgeous take on the complicated bonds of female love and friendship, told in lyrical, creeping prose as haunting as the tale itself. The ghosts of Felicity, Ellis, and Alex—and of Dalloway School and its historical witches—will linger with you long after the final page.” —Lana Popović, author of Wicked Like a Wildfire

"…Devastatingly poetic...Teens will be as haunted by this narrative as the characters within its pages."—SLJ, starred review