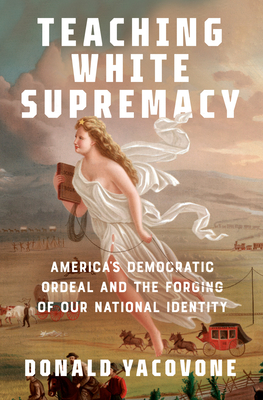 A powerful exploration of the past and present arc of America’s white supremacy—from the country’s inception and Revolutionary years to its 19th century flashpoint of civil war; to the Civil Rights movement of the 1960s and today’s Black Lives Matter.

“Stunning, timely . . . an achievement in writing public history . . . Teaching White Supremacy should be read widely in our roiling debate over how to teach about race and slavery in classrooms." —David W. Blight, Sterling Professor of American History, Yale University; author of the Pulitzer-prize-winning Frederick Douglass: Prophet of Freedom

Donald Yacovone shows us the clear and damning evidence of white supremacy’s deep-seated roots in our nation’s educational system through a fascinating, in-depth examination of America’s wide assortment of texts, from primary readers to college textbooks, from popular histories to the most influential academic scholarship. Sifting through a wealth of materials from the colonial era to today, Yacovone reveals the systematic ways in which this ideology has infiltrated all aspects of American culture and how it has been at the heart of our collective national identity.

Yacovone lays out the arc of America’s white supremacy from the country’s inception and Revolutionary War years to its nineteenth-century flashpoint of civil war to the civil rights movement of the 1960s and today’s Black Lives Matter. In a stunning reappraisal, the author argues that it is the North, not the South, that bears the greater responsibility for creating the dominant strain of race theory, which has been inculcated throughout the culture and in school textbooks that restricted and repressed African Americans and other minorities, even as Northerners blamed the South for its legacy of slavery, segregation, and racial injustice.

A major assessment of how we got to where we are today, of how white supremacy has suffused every area of American learning, from literature and science to religion, medicine, and law, and why this kind of thinking has so insidiously endured for more than three centuries.

“How did the South 'win the narrative war' about race equality, as Bryan Stevenson has so aptly put it, following the Civil War? In fascinating, if deeply troubling detail, the historian Donald Yacovone has charted the creation and systematic implementation of the pernicious myth of white supremacy in the very classrooms of America where our youngest and most impressionable citizens are shaped. Examining an astounding array of textbooks in the 19th and 20th centuries, Yacovone in compelling prose has captured the nation’s deliberate fashioning of 'American identity' as fundamentally, inevitably, and unalterably 'white.' The most profoundly original cultural history in recent memory, Teaching White Supremacy places the development and institutionalization of American racial ideology squarely where it belongs: not in the slave South, but in the ostensibly free North, assaulting common perceptions of Northern racial exceptionalism. If we want to understand the roots of our current culture wars and our current battles over the place of race in American history classes, this marvelous book is the place to start. Yacovone’s recovery of the long buried roots of racist discourse in our children’s textbooks, is crucial to the creation of a long-deferred narrative of America’s multi-racial past, and our multicultural present and future.”—Henry Louis Gates, Jr., Harvard University

“Donald Yacovone has written a stunning, timely book about the history of our history wars. It is at once a history of American education through the lens of white supremacist ideas, a revealing study of K-12 history textbooks, and an analysis of both the complicity in and the overturning of the racist-progress narrative in historical scholarship. The book is an achievement in writing public history, and it should be read widely in our roiling debate over how to teach about race and slavery in classrooms. For those wondering how we got here with book bannings, politicized school boards, librarians in duress, and maddening ignorance about the American past, here is the long view and the immediate challenge.”—David W. Blight, Sterling Professor of American History, Yale University; author of the Pulitzer-prize-winning Frederick Douglass: Prophet of Freedom

“Teaching White Supremacy reveals in great detail the battle over historical memory in public schools and how the white elite has devoted extraordinary resources to perpetuating racist ideas in each generation through the K-12 curriculum . . . Yacovone documents the timeworn playbook guiding contemporary legislators in their campaign to censor teaching truthfully about racism and other forms of oppression in U.S. history . . . Those stories of resistance permeate the book and offer strategies and inspiration for those defending the right to teach outside the textbook today.”—Deborah Menkart, executive director of Teaching for Change and co-director of the Zinn Education Project

“[Yacovone] masterfully details how U.S. K–12 and college texts since the 1830s have inculcated whiteness as a national inheritance passed from generation to generation . . .  accessible, thoroughly documented, and well-reasoned. . .  essential reading for all interested in truly understanding America’s past and the systemic distortions to repress and restrict the historical narrative with an insidious ideology.”—Library Journal (starred review)