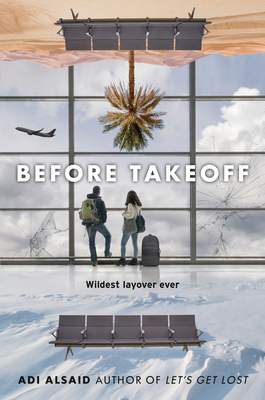 The Sun Is Also a Star meets Jumanji when two teens meet and fall in love during a layover-gone-wrong at the Atlanta airport in this thrilling new novel from the author of Let's Get Lost!

James and Michelle find themselves in the Atlanta airport on a layover. They couldn't be more different, but seemingly interminable delays draw them both to a mysterious flashing green light--and each other.

Where James is passive, Michelle is anything but. And she quickly discovers that the flashing green light is actually... a button. Which she presses. Which may or may not unwittingly break the rules of the universe--at least as those rules apply to Hartsfield-Jackson Atlanta.

Before they can figure up from down, strange, impossible things start happening: snowstorms form inside the B terminal; jungles sprout up in the C terminal; and earthquakes split the ground apart in between. And no matter how hard they try, it seems no one can find a way in or out of the airport. James and Michelle team up to find their families and either escape the airport, or put an end to its chaos--before it's too late.

Adi Alsaid was born and raised in Mexico City. He attended college at the University of Nevada, Las Vegas. He's now back in Mexico City, where he writes, coaches basketball, and makes every dish he eats as spicy as possible. In addition to Mexico, he's lived in Tel Aviv, Las Vegas and Monterey, California. His previous YA books include Let's Get Lost, Never Always Sometimes, North of Happy, Brief Chronicle of Another Stupid Heartbreak, and We Didn't Ask for This.