One Moment in Time: Children around the world (Hardcover) 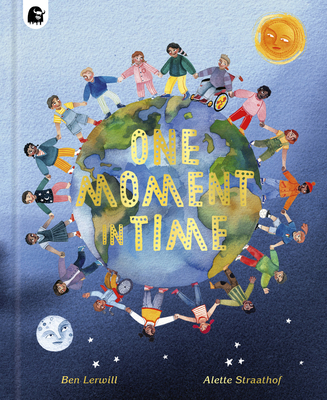 It’s 7 o’clock in the morning in Mexico, and Javier is eating his breakfast. He’s having corn tortillas with beans and a glass of orange juice.

And at exactly the same time…

…it’s 8 o’clock in the morning in New York City. Kayla is getting her schoolbag ready. A yellow school bus will take her to the school gates.

One Moment in Time is a lyrical celebration of diversity with a heartfelt message of unity. Featuring eleven different children, this book takes readers on a colourful, eye-opening journey around the globe in a single day, showing what children in different countries are each doing at the same point in time.

From travel writer Ben Lerwill, and with beautiful illustrations from Alette Straathof this non-fiction picture book introduces children to different cultures around the world.

Ben Lerwill is an award-winning travel writer and children's author based in Oxfordshire, England. Ben's writing has appeared in more than 50 national and international titles, including National Geographic Traveller, Wanderlust, Time Out, BBC Travel, The Guardian, The Sunday Times, The Observer, The Independent, BBC Countryfile, and Rough Guides. His non-fiction children's books include One World Many Colours, WildLives, and Wild Cities.

Alette Straathof is an illustrator who lives and works in Paris, France. She graduated in January 2016 at the Willem de Kooning Academy in Rotterdam, The Netherlands. Alette tries to hide small details in every one of her illustrations for people to discover – see if you can find them all.