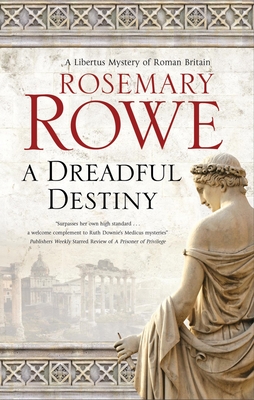 This is book number 19 in the Libertus Mystery of Roman Britain series.

An unwelcome proposal of marriage has far-reaching repercussions in this skilfully plotted historical mystery.

April, CE 194.
The tensions in the civil-war-torn Empire have come to Glevum now. Libertus's patron, Marcus Septimus, has received a letter from Druscilla Livia, a widowed cousin of his wife, seeking his protection. She has received an offer of marriage from a powerful Roman Senator, Hortius Valens, a man of cruel and unusual tastes, and she is in no position to refuse. She has run away . . . with Hortius in hot pursuit.

This puts Marcus in a dangerous dilemma. If he accepts Druscilla as his ward and prevents the wedding, he offends not only her prospective groom, but also the Provincial Governor to whom Hortius is related. But if he returns Druscilla to the Senator, he offends another of her kinswomen - the Empress herself. Once again, Marcus turns to Libertus for help. But Libertus has worries of his own. His wife Gwellia has an injured foot, which is now infected and could cost her life. But when one of his own slaves is brutally killed he realizes how perilous the situation has become. Resolving to help Druscilla, he concocts an ingenious plan. But in defying the Senator, Libertus is making a powerful enemy. And even the best-laid plans can go disastrously awry . . .