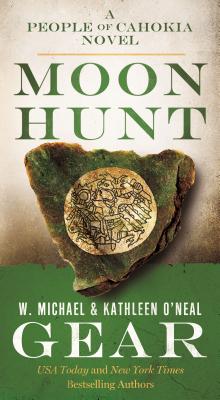 By W. Michael Gear, Kathleen O'Neal Gear
$9.99
Not available, maybe be backordered or out of print

Against the intricate majesty that was America’s greatest pre-Columbian city, the Gears have once again woven the latest archaeological data into a painstakingly accurate reconstruction of Cahokia and provide a rare look into the mystical underpinnings of Native American culture.

What happens when your god goes missing?

The lord god of Cahokia has been spirited away to the Underworld and the empire teeters on the brink of disaster as clans fight for control.Night Shadow Star, the god’s human sister, and Fire Cat, her warrior bodyguard, are the only two people who can bring him back. They descend into the Sacred Cave where monsters dwell, willing to sacrifice themselves to save their kingdom.

What they find makes them question if that sacrifice is worth it.

W. Michael Gear, who holds a master's degree in archaeology, has worked as a professional archaeologist since 1978. He is currently principal investigator for Wind River Archaeological Consultants. With his wife, Kathleen O’Neal Gear, he has written the international and USA Today bestselling North America's Forgotten Past Series (including People of the Songtrail, People of the Morning Star, Sun Born, Moon Hunt, among others); and Anasazi Mystery Series.

Kathleen O'Neal Gear is a former state historian and archaeologist for Wyoming, Kansas, and Nebraska for the U.S. Department of the Interior. She has twice received the federal government's Special Achievement Award for "outstanding management" of our nation's cultural heritage. With her husband, W. Michael Gear, she is the co-author of many books, including the North America’s Forgotten Past series (People of the Songtrail, People of the Morning Star, Sun Born, Moon Hunt, among others); and the Anasazi Mysteries series. She and her husband live in Thermopolis, WY.

Praise for the North America's Forgotten Past Series

“America’s prehistory comes to life once again in the capable hands of the Gears, who never fail to strike the perfect balance between cultural fact and magnificent storytelling.”—Booklist on Moon Hunt

“The Gears have written an epic novel that combines the cultural history of Cahokia with the fast-paced narrative of a thriller to explore the all-too-human and universal dangers of greed and overweening ambition.”—New York Journal of Books on People of the Morning Star

“A magnificent, sweeping world—America, circa 7300 B.C.—that is so real you can almost breathe in the air of it. It tells a bighearted story of war and peace, love and violence, with a cast of richly drawn characters. This is a novel that will stay with you for years—I guarantee it.”—Douglas Preston, New York Times bestselling author, on People of the Raven

“The Gears have brought readers fascinating and richly detailed stories of prehistoric North America with tales as rich in cultural meaning as they are in political context.”—RT Book Reviews on People of the Owl