Code of Silence: Inside the Case That Led to the First Federal Judge to be Impeached for Sexual M isconduct (Paperback) 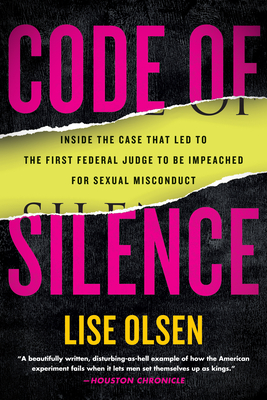 Winner of the 2022 Texas Institute of Letters Carr P. Collins Award for Best Book of Nonfiction

In the age of #MeToo, learn how brave whistleblowers have dared to lift the federal court’s veil of secrecy to expose powerful judges who appear to defy laws they have sworn to uphold

Code of Silence tells the story of federal court employee Cathy McBroom, who had to flee her job as a case manager in Galveston, Texas, after enduring years of sexual harassment and assault by her boss—US District Judge Samuel Kent. Following a decade of firsthand reporting at the Houston Chronicle, investigative reporter Lise Olsen charts McBroom’s assault and the aftermath, when McBroom was thrust into the role of whistleblower to denounce a federal judge.

What Olsen discovered by investigating McBroom’s story and other federal judicial misconduct matters nationwide was shocking. With the help of other federal judges, Kent was being protected by a secretive court system that has long tolerated or ignored complaints about corruption, sexism, and sexual misconduct—enabling him to remain in office for years. Other powerful judges accused of judicial misconduct were never investigated and remain in power or retired with full pay, such as US Circuit Judge Alex Kozinski and Kozinski’s mentee, Brett Kavanaugh.

McBroom’s ultimate triumph is a rare story of redemption and victory as Judge Kent became the first and only federal judge to be impeached for sexual misconduct. Olsen also weaves in narratives of other brave women across the country who, at great personal risk, have reported federal judges to reveal how sexual harassment and assault occur elsewhere inside the federal court system. The accounts of the women and their allies who are still fighting for reforms are moving, intimate, and inspiring—including whistleblowers and law professors like Leah Litman, Emily Murphy, and novelist Heidi Bond, who emerged to denounce Kozinski in 2017. A larger group of women—and men—banded together to form a group called Law Clerks for Accountability, which is continuing to push for more reforms to the courts’ secretive complaint review system.

Code of Silence also reveals the role the press plays in holding systems of power in check. Kent would not have been charged had it not been for Olsen’s reporting and the Houston Chronicle’s commitment to the story.

Lise Olsen is a senior investigative reporter whose work has appeared in the Texas Observer, InsideClimate News, and the Houston Chronicle, as well as in documentaries on CNN and A&E. Olsen has more than 20 years’ experience specializing primarily in crime, corruption, worker safety, and human rights. She has extensively covered federal judicial corruption sagas, including the initially secret sexual assault complaint and subsequent impeachment of a federal judge, as well as other misconduct cases. Her reports have inspired laws and reforms, spurred official investigations and prosecutions, restored names to unidentified murder victims, and freed dozens of wrongfully held prisoners. Follow her on Twitter (@lisedigger).

“A dismaying and deeply reported exposé . . . This is an enraging and eye-opening account of corruption and abuse within the halls of justice.”
—Publishers Weekly

“A beautifully written, disturbing-as-hell example of how the American experiment fails when it lets men set themselves up as kings.”
—Houston Chronicle

“A long overdue exposé on how the judicial system suppresses claims of sexual harassment against judges . . . Essential reading.”
—Anita Hill

“One of journalism’s finest investigative reporters exposes what goes on in the most secret of chambers, showing how far too often, and for far too long, federal judges have been able to abuse their extraordinary power with impunity. . . . The result is a story of shameful failure in the highest reaches.”
—Ken Armstrong, Pulitzer Prize–winning reporter and coauthor of Unbelievable

“At once heartbreaking, infuriating, and heroic, Code of Silence is a masterpiece of #MeToo investigative journalism that takes apart gross injustice within the court system and the judges who rule over it—and likewise rule over the women who support them. Olsen’s writing is as propulsive as it is informative. . . . This new entry in the #MeToo genre is not to be missed.”
—Donna Freitas, author of Consent: A Memoir of Unwanted Attention

“A classic story of villainous oppressors and vulnerable targets. You would think it was a fairy tale, except it is wrenchingly true. Lise Olsen, one of a growing class of heroic journalists who acted when agencies of governance failed, tells the story of the men who routinely sexually abused and harassed the women in their power, and, wait for it, they were judges. Who will judge the judges, indeed? Thanks in part to Olsen, the women got some justice in the end. A riveting and eye-opening read.”
—Linda Hirshman, author of Reckoning: The Epic Battle Against Sexual Abuse and Harassment

“Lise Olsen is a masterful investigative reporter and storyteller. She was the first to uncover the full story of Judge Samuel Bristow Kent and the victims he harmed. Her book goes right to the heart of judicial corruption—and the complaint system that protects federal judges. Harrowing and redemptive.”
—Skip Hollandsworth, author of The Midnight Assassin and executive editor of Texas Monthly