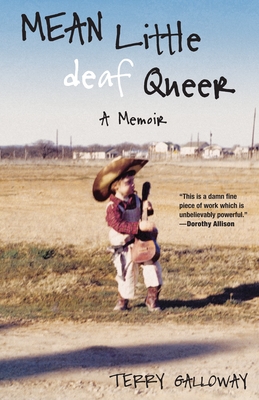 By Terry Galloway
$20.00
Not available, maybe be backordered or out of print

In 1959, the year Terry Galloway turned nine, the voices of everyone she loved began to disappear. No one yet knew that an experimental antibiotic given to her mother had wreaked havoc on her fetal nervous system, eventually causing her to go deaf. As a self-proclaimed "child freak," she acted out her fury with her boxy hearing aids and Coke-bottle glasses by faking her own drowning at a camp for crippled children. Ever since that first real-life performance, Galloway has used theater, whether onstage or off, to defy and transcend her reality. With disarming candor, she writes about her mental breakdowns, her queer identity, and living in a silent, quirky world populated by unforgettable characters. What could have been a bitter litany of complaint is instead an unexpectedly hilarious and affecting take on life.

Terry Galloway is the founder of the Actual Lives writing and performance programs; a founding member of Esther’s Follies, Austin, Texas’s legendary cabaret; and cofounder of the Mickee Faust Club in Tallahassee, Florida. She divides her time between Austin and Tallahassee.

This is a damn fine piece of work which is unbelievably powerful.—Dorothy Allison

"This is not your mother's triumph-of-the-human-spirit memoir. Yes, Terry Galloway is resilient. But she's also caustic, depraved, utterly disinhibited, and somehow sweetly bubbly, a beguiling raconteuse who periodically leaps onto the dinner table and stabs you with her fork. Her story will fascinate, it will hurt, and you will like it."—Alison Bechdel, author of Fun Home

"The most uncomfortable laughter of the season."—Out

"One of the finest, most nakedly honest and humorous autobiographies out there to be read. . . . Partly David Sedaris-esque in its slice-of-life essay moments, part slapstick farce, so very real, and always laugh out loud hilarious."—Rebecca Sarwate, Edge

"[Galloway] is dexterous in her use of words and devastating with a sense of black humor that brings numerous laugh-out-loud delights."—John R. Killacky, The Gay and Lesbian Review

"Galloway was born a storyteller, and her narrative gifts are in full force throughout, spinning yarns about herself and her family that mesmerize."—Robert Faires, Austin Chronicle