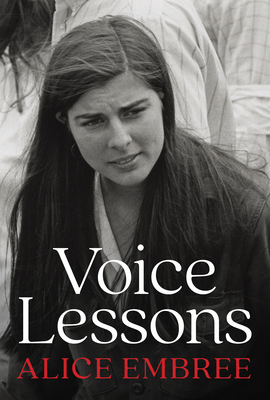 Voice Lessons explores the rich personal and political terrain of Alice Embree, a 1960s activist and convert to the women’s liberation movement of the 1970s, bringing a woman’s perspective to a transformational time in US history. This riveting memoir traces the author’s roots in segregated Austin and her participation in efforts to integrate the University of Texas. It follows her antiwar activism from a vigil in front of President Lyndon Johnson’s ranch in 1965 to a massive protest after the shootings at Kent State in 1970. Embree’s activism brought her and the Students for a Democratic Society into conflict with Frank Erwin, the powerful chairman of the UT Board of Regents, and inspired a campus free speech movement. She recounts her experiences living in New York during the tumultuous years of 1968 and 1969, including the Columbia University strike and the Woodstock music festival. She also tells about protesting at the Chicago Democratic Convention, her interactions with Yippies and poets, and her travels to Chile, Cuba, and Mexico. Embree highlights the radical roots of the women’s liberation movement in Austin and the audacious women’s community that challenged gender roles, fought for reproductive justice, and inspired a lifetime of activism.

Alice Embree is a nationally known writer and activist. She was a leader of Students for a Democratic Society at the University of Texas, helped launch Austin’s underground newspaper The Rag, and contributed to the 1970 anthology Sisterhood is Powerful. She is an editor of Celebrating The Rag: Austin’s Iconic Underground Newspaper, published in 2016.