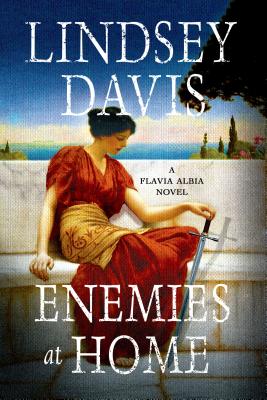 This is book number 2 in the Flavia Albia Series series.

"There are rules for private informers accepting a new case. Never take on clients who cannot pay you. Never do favours for friends. Don't work with relatives. If, like me, you are a woman, keep clear of men you find attractive.

"Will I never learn?"

In Ancient Rome, the number of slaves was far greater than that of free citizens. As a result, often the people Romans feared most were the "enemies at home," the slaves under their own roofs. Because of this, Roman law decreed that if the head of a household was murdered at home, and the culprit wasn't quickly discovered, his slaves—all of them, guilty or not—were presumed responsible and were put to death. Without exception.

When a couple is found dead in their own bedroom and their house burglarized, some of their household slaves know what is about to happen to them. They flee to the Temple of Ceres, which by tradition is respected as a haven for refugees. This is where Flavia Albia comes in. The authorities, under pressure from all sides, need a solution. Albia, a private informer just like her father, Marcus Didius Falco, is asked to solve the murders, in this mystery from Lindsey Davis.

“Davis combines excellent research, expansive knowledge, and vivid writing to immerse readers in ancient Rome. The people and the places of the city seem both authentic and familiar...a great read!” —Library Journal on The Ides of April

“The Flavia Albia series promises to be every bit as exciting and enduring as the Falco mysteries.” —Booklist (starred review)

“Davis delights. . .with her trademark blend of quirky characters and rich period detail. Readers can anticipate Flavia Albia to be a compelling presence for years to come.” —Booklist (starred review) on Ides of April

“Flavia proves a worthy successor to her wily father and, as always, under all the excitement runs the solidity of Davis's historical knowledge” —The Independent (UK) on The Ides of April

“Flavia Albia makes her debut courtesy of the author of the long-running Marcus Didius Falco series (Nemesis, 2010, etc.). This installment includes the same helpful map of the city and cast of characters and a feistier style…Flavia demonstrates appealing wit and grit.” —Kirkus Reviews on The Ides of April

“Entertaining … taut and deftly woven. Albia is a witty and attractive addition to the roster of his family and as ever with a Davis novel—the narration is done so delightfully that the final impression is curiously warm and uplifting.” —The Guardian (London)  on The Ides of April

“Davis's sequel to 2013's The Ides of April boasts a strong female lead, [and]… vividly portrays the setting, ‘a poisoned city, where a paranoid emperor had caused often-lethal mistrust,'” —Publishers Weekly on Enemies at Home