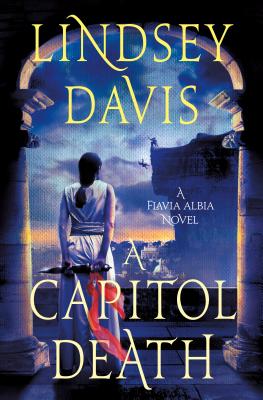 This is book number 7 in the Flavia Albia Series series.

In Rome, ruled by the erratic Emperor Domitian, Flavia Albia is dragged into the worst sort of investigation—a politically charged murder—in Lindsey Davis’s next historical mystery, A Capitol Death.

A man falls to his death from the Tarpeian Rock, which overlooks the Forum in the Capitoline Hill in Ancient Rome. While it looks like a suicide, one witness swears that she saw it happen and that he was pushed. Normally, this would attract very little official notice but this man happened to be in charge of organizing the Imperial Triumphs demanded by the emperor.

The Emperor Domitian, autocratic and erratic, has decided that he deserves two Triumphs for his so-called military victories. The Triumphs are both controversial and difficult to stage because of the not-so-victorious circumstances that left them without treasure or captives to be paraded through the streets. Normally, the investigation would be under the auspices of her new(ish) husband but, worried about his stamina following a long recovery, private informer Flavia Albia, daughter of Marcus Didius Falco, steps in.

What a mistake that turns out to be. The deceased proves to have been none-too-popular, with far too many others with much to gain from his death. With the date of the Triumphs fast approaching, Flavia Albia must unravel a truly complex case of murder before danger shows up on her own doorstep.

"Remarkably fresh... Author Lindsey Davis (Pandora’s Boy) balances grit and frivolity with ease. Flavia feels like the love child of Philip Marlowe and Carrie Bradshaw—she’s on the case, observing and reporting with care, but keeps a running line of saucy commentary on everyone throughout." —Bookpage

"Davis does her usual brilliant job of integrating the history of the period, warts and all... a fast-paced and fair whodunit. This entry reinforces her place at the top of the historical mystery pack." —Publishers Weekly (starred review)

"The abundant charm of the heroine and the heavily detailed historical background will hook readers and keep them hooked." —Kirkus Reviews