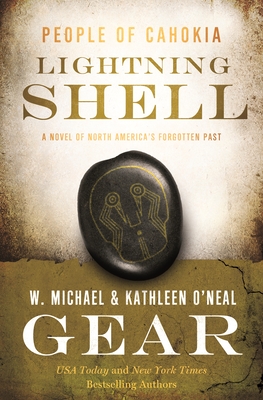 Spotted Wrist’s squadrons are about to launch an assault on Evening Star Town. Meanwhile, the new Keeper’s loyal squadrons have taken control of central Cahokia.

Blue Heron’s enemies have declared her dead, a supposed victim of the fire that consumed her palace. She’s alive and in the end it will be her wits, Seven Skull Shield’s licentious cunning, and a desperate gamble that determine who lives and who dies in Cahokia.

Meanwhile, in the distant east, a desperate three-way race is underway. Walking Smoke—the Lightning Shell witch—hastens to make his way back to Cahokia, understanding that the cure for his impotence lies atop Morning Star’s Mound.

Night Shadow Star means to stop him before he can get to Morning Star. Following in her wake, Fire Cat is merciless. He will stop at nothing to ensure that it is he, not Night Shadow Star, who pays the ultimate price.

The final showdown will shake Cahokia to its roots, and nothing will be the same again.

W. Michael Gear, who holds a master's degree in archaeology, has worked as a professional archaeologist since 1978. He is currently principal investigator for Wind River Archaeological Consultants. With his wife, Kathleen O’Neal Gear, he has written the international and USA Today bestselling North America's Forgotten Past Series (including People of the Songtrail, People of the Morning Star, Sun Born, Moon Hunt, among others); and Anasazi Mystery Series.

Kathleen O'Neal Gear is a former state historian and archaeologist for Wyoming, Kansas, and Nebraska for the U.S. Department of the Interior. She has twice received the federal government's Special Achievement Award for "outstanding management" of our nation's cultural heritage. With her husband, W. Michael Gear, she is the co-author of many books, including the North America’s Forgotten Past series (People of the Songtrail, People of the Morning Star, Sun Born, Moon Hunt, among others); and the Anasazi Mysteries series. She and her husband live in Thermopolis, WY.

Praise for the Gears' North America's Forgotten Past books:

“A magnificent, sweeping world—America, circa 7300 b.c.—that is so real you can almost breathe in the air of it…This is a novel that will stay with you for years—I guarantee it.”—Douglas Preston, New York Times bestselling author, on People of the Raven

“An epic novel that combines the cultural history of Cahokia with the fast-paced narrative of a thriller.”—New York Journal of Books on People of the Morning Star

“The most convincing reconstruction of prehistory I have yet read.”—Morgan Llywelyn, author of Lion of Ireland, on People of the Earth

“Rich in cultural detail...Both longtime fans and newcomers will be satisfied. Another fine entry in an ambitious, long-running series.”—Kirkus Reviews on People of the Longhouse

“Blended with the carefully drawn suspense of court intrigues, colorful characters and sharp plot twists, this is a terrific tale.”—Publishers Weekly on People of the Thunder

“Drawing on their backgrounds in archaeology, the Gears vividly recreate Paleolithic America in this enchanting and instructive novel.” —Publishers Weekly on People of the Nightland