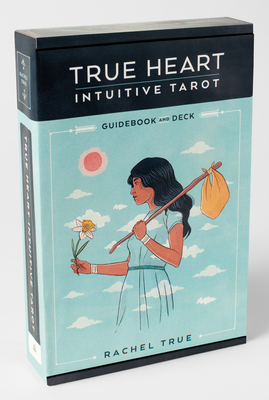 An exquisite tarot card deck and guidebook boxed set by Rachel True, beloved for her role as the co-star of the cult-classic movie The Craft

Rachel True, an actress best known for her role in The Craft, is a lifelong occultist—she had been reading tarot cards long before being cast in the 90s witchy cult classic. Now, True shares her tarot knowledge through her unique guidebook and deck boxed set. Each card in the deck is uniquely made following a beautiful, multicultural aesthetic. True’s guidebook helps readers use the cards as she does: with an intuitive approach, rather than assigning one literal definition to each card. She shares personal stories from her experiences in Hollywood to explain how the cards can mean something different for each person, depending on their unique set of circumstances. True’s stance is that tarot cards don’t predict the future, but rather suggest possible outcomes based on the reader’s present energy.

Rachel True is an American actress who has appeared in numerous hit and cult films including The Craft, about a coven of young witches, the stoner classic Half Baked, and Greg Araki's Nowhere which premiered at Sundance Film Festival. Rachel was also the lead on the TV show Half & Half, for which she was nominated for an NAACP award. A native New Yorker and an avid bibliophile, Rachel is a life-long tarot practitioner. She now lives with her two Siamese cats in Los Angeles. Visit her website: TrueHeartTarot.com.