The Music Of What Happens (Paperback) 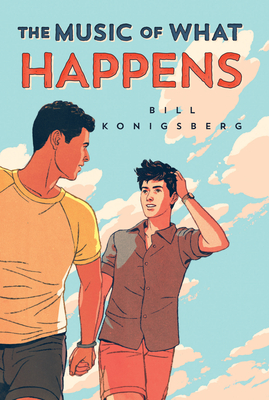 * "Konigsberg demonstrates once again why he is one of the major voices in LGBTQ literature." -- Booklist, starred review

Max: Chill. Sports. Video games. Gay and not a big deal, not to him, not to his mom, not to his buddies. And a secret: An encounter with an older kid that makes it hard to breathe, one that he doesn't want to think about, ever.

Jordan: The opposite of chill. Poetry. His "wives" and the Chandler Mall. Never been kissed and searching for Mr. Right, who probably won't like him anyway. And a secret: A spiraling out of control mother, and the knowledge that he's the only one who can keep the family from falling apart.

Throw in a rickety, 1980s-era food truck called Coq Au Vinny. Add in prickly pears, cloud eggs, and a murky idea of what's considered locally sourced and organic. Place it all in Mesa, Arizona, in June, where the temp regularly hits 114. And top it off with a touch of undeniable chemistry between utter opposites.

Over the course of one summer, two boys will have to face their biggest fears and decide what they're willing to risk -- to get the thing they want the most.

Bill Konigsberg is the author of six books for young adults, which have won awards including the Stonewall Book Award, the Sid Fleischman Award for Humor, and the Lambda Literary Award. Bill lives with his husband, Chuck, and their two Labradoodles, Mabel and Buford. Please visit him online at billkonigsberg.com and @billkonigsberg.

* "Konigsberg demonstrates once again why he is one of the major voices in LGBTQ literature." -- Booklist, starred review

* "Give to fans of Benjamin Alire Saenz's Aristotle and Dante Discover the Secrets of the Universe and Laurie Halse Anderson's Speak. A first purchase for public and high school libraries." -- School Library Journal, starred review

"The result is a story with imperfect characters who are, refreshingly, called out on problematic behaviors and aim to do better. A fresh addition to the menu of queer teenage love stories." -- Kirkus Reviews

"Konigsberg explores how conventional ideas about masculinity trap young men into believing they must act a certain way.... A fun, romantic, and moving novel." -- Publishers Weekly

"This book offers an interesting perspective on growing up and coming-of-age by crafting two main characters who offer unique points of view for an often underserved audience. This is a much-needed book in every high school library." -- School Library Connection

"With The Music of What Happens, Bill Konigsberg serves up a profound examination of masculinity, consent, and relationships through the eyes of two of the most endearing narrators I've ever read. Jordan and Max are vulnerable, sweet, funny, and flawed. Teens, whether they identify as LGBTQIA+ or not, are lucky to have this book in their lives." -- Shaun David Hutchinson, author of We Are the Ants

"The Music of What Happens is a compelling, laugh-out-loud story, as swoon-worthy as it is deeply affecting. Max and Jordan grabbed hold of my heart from the moment I met them and I don't see them letting go any time soon. Konigsberg has a way of making me see the world--and food trucks!--a little differently." -- David Arnold, New York Times bestselling author of Mosquitoland and The Strange Fascinations of Noah Hypnotik

"Bill Konigsberg has a way of creating characters that could be your next door neighbor, your best friend, or that cute boy who once helped you change a flat tire. Max and Jordan will find their way into your heart, and after the last page, you'll regret that they aren't real. Once you start reading The Music of What Happens, you won't be able to stop." -- Brigid Kemmerer, author of Letters to the Lost