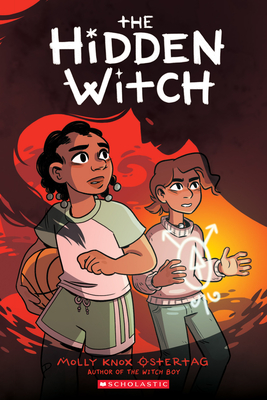 From the creator of the acclaimed graphic novel The Witch Boy comes a new adventure set in the world of magic and shapeshifting -- and ordinary kids just trying to make friends.
Aster and his family are adjusting to his unconventional talent for witchery; unlike the other boys in his family, he isn't a shapeshifter. He's taking classes with his grandmother and helping to keep an eye on his great-uncle whose corrupted magic wreaked havoc on the family.

Meanwhile, Aster's friend from the non-magical part of town, Charlie, is having problems of her own -- a curse has tried to attach itself to her. She runs to Aster and escapes it, but now the friends must find the source of the curse before more people -- normal and magical alike -- get hurt.

Molly Knox Ostertag is the author and illustrator of the acclaimed graphic novels The Witch Boy and The Hidden Witch and the illustrator of several projects for older readers, including the webcomic Strong Female Protagonist and Shattered Warrior by Sharon Shinn. She grew up in the forests of upstate New York and graduated in 2014 from the School of Visual Arts, where she studied cartooning and illustration. She currently lives in Los Angeles with her girlfriend and several pets. Visit her online at mollyostertag.com.

Praise for The Witch Boy:

"Ostertag's story is straightforward, acting as a parable for gender conformity that's pitched just right to middle-grade audiences. Her panels are clear, colorful, and friendly, and her worldbuilding flawless...With charming artwork, interesting supporting characters, natural-feeling diversity, and peeks of a richly developed world, this book leaves readers wishing for more." -- Kirkus Reviews, starred review
"Thrilling. Ostertag is one of comics' brightest new voices." -- Hope Larson, author of Compass South
"Ostertag is creating worlds and witches for the modern young reader." -- Lucy Knisley, author of Something New and Relish
"Dazzling...a contemporary fantasy for anyone who's struggled with defining themselves." -- Marika McCoola, author of Baba Yaga's Assistant