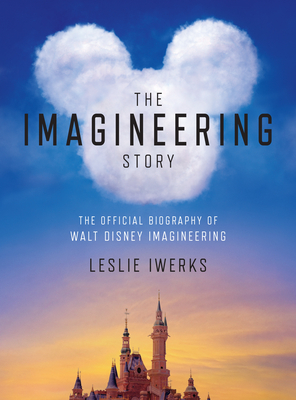 By Leslie Iwerks, Bruce Steele (With), Mark Catalena (Contributions by)
$35.00
Not available, maybe be backordered or out of print

The entire legacy of WDI is covered from day one through future projects with never-before-seen access and insights from people both on the inside and on the outside. So many stories and details were left on the cutting room floor—this book allows an expanded exploration of the magic of Imagineering.

So many insider stories are featured.

° Sculptor Blaine Gibson’s wife used to kick him under the table at restaurants for staring at interesting-looking people seated nearby, and he’d even find himself studying faces during Sunday morning worship. “You mean some of these characters might have features that are based on people you went to church with?” Marty Sklar once asked Gibson of the Imagineer's sculpts for Pirates of the Caribbean. “He finally admitted to me that that was true.”

° In the early days, Walt Disney Imagineering "was in one little building and everybody parked in the back and you came in through the model shop, and you could see everything that was going on,” recalled Marty Sklar. “When we started on the World’s Fair in 1960 and 1961, we had 100 people here. And so everybody knew everything about what was happening and the status of [each] project, so you really felt like you were part of the whole team whether you were working on that project or not. And, you know, there was so much talent here.”

A must-have for Disney Parks fans!


Searching for that perfect gift for the #1 Disney fan in your life? Explore more behind-the-scenes stories from Disney Editions:
One Little Spark! Mickey's Ten Commandments and The Road to Imagineering (By Disney Legend Marty Sklar)
Magic Journey: My Fantastical Walt Disney Imagineering Career (By Kevin Rafferty)
Travels with Walt Disney: A Photographic Voyage Around the World (By Jeff Kurtti)
Eat Like Walt: The Wonderful World of Disney Food (By Marcy Carriker Smothers)
Walt Disney: An American Original (By Bob Thomas)
Disney A to Z: The Official Encyclopedia, Fifth Edition (By Disney Legend Dave Smith)

Leslie Iwerks is an Academy Award and Emmy nominated director and producer. For over a decade, she has produced, directed, and edited award-winning feature and short documentaries, television specials, tributes, corporate films, and digital content. Her clients have included Disney, Pixar, Hearst, Starz, Bravo, GE, The Academy of Motion Picture Arts and Sciences, among others.Her body of work encompasses enterprise feature films (The Pixar Story, Citizen Hearst, ILM: Creating the Impossible, The Imagineering Story, The Hand Behind the Mouse) to her acclaimed environmental and social issue documentaries (Recycled Life, Pipe Dreams, and Downstream).Her desire to innovate and push boundaries in documentaries, film, animation and new technologies has been cultivated and inspired by her family upbringing. Her grandfather, Ub Iwerks, was the original designer and co-creator of Mickey Mouse and multi Academy Award-winning visual effects pioneer. Her father, Don Iwerks, also an Academy Award winner for Technical Lifetime Achievement, was founder of the large format film company, Iwerks Entertainment, building systems in over 200 theaters around the world.As a young girl, Leslie would accompany her dad to the Disneyland parks, getting a rare behind-the-scenes look at everything from attraction design and animatronics, to the filming of Michael Jackson and Francis Ford Coppola’s Captain EO. On weekends, Leslie would tag along with her dad to the Studio Machine Shop and escape into the imaginative backlot movie sets, a period of time that solidified her passion for the behind-the-scenes aspects of moviemaking.Leslie is an adventure and travel enthusiast, and has filmed on all seven continents around the world.