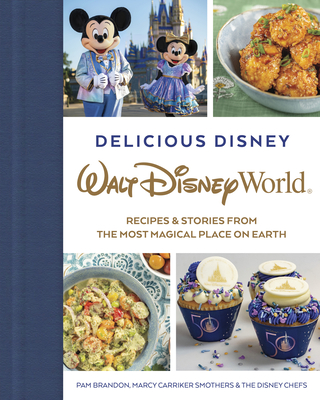 Walt Disney World honors its fiftieth anniversary with "The World's Most Magical Celebration," an incredible 18-month event that begins October 1, 2021. As part of the festivities, Delicious Disney: Walt Disney World is a holistic look at the Florida resort's culinary past, present, and future—all organically woven around diverse recipes from the Disney Chefs and fit for home chefs of varying skill levels.

After the success of Disneyland, Walt Disney wanted to build something more elaborate and with more room. Ultimately, it was Walt's brother and business partner, Roy O. Disney, who brought forth his sibling's dream—and made it a reality—when the Magic Kingdom opened in 1971. More than fifty years later, we still celebrate Walt's dream, Roy's vision and commitment, plus the dedication of those who serve up a world of magic. And all of it is deliciously Disney.

Filled with a heartfelt narrative and behind-the-scenes anecdotes, mouth-watering food photos, gorgeous Walt Disney Imagineering concept artwork, nostalgic restaurant menus and ephemera, and a little Disney magic, this cookbook-meets-culinary-history coffee table book enchants with more than sixty recipes. Including an assortment of appetizers, main courses, sides, desserts, and even joyful libations, these dishes come from fine-dining and quick-service establishments across the resort. Each has been tested by home chefs to help you bring your cherished vacation memories to life . . . and inspire new ones for years to come.

Here’s just a sampling of what awaits inside:
Searching for ways to celebrate the Walt Disney World Resort? Explore more books from Disney Editions:

PAM BRANDON started her Disney career as a senior publicist with Walt Disney World Press & Publicity in 1987 in a small office upstairs in City Hall in the Magic Kingdom. She has worked on public relations food and beverage projects for Disney parks around the globe for more than thirty years, including the openings of Disneyland Paris; Disney California Adventure; Aulani, A Disney Resort & Spa; and Shanghai Disney Resort. In addition, Brandon was a contributing editor to the Birnbaum's Disney guidebooks for more than ten years, covering the Walt Disney World Resort, Disneyland Resort, and Disney Cruise Line ships. She was the first food writer for the Disney Parks Blog and has authored twenty-one cookbooks for Disney.

MARCY CARRIKER SMOTHERS is the author of the fan favorite Eat Like Walt: The Wonderful World of Disney Food, a New York Times New & Noteworthy selection in 2018. Her love of all things Disney, especially Disneyland, inspired her to delve into Walt Disney's world of food. A noted radio personality, she hosted several programs, including The Food Guy and Marcy Show with the Food Network's Guy Fieri. Marcy's next book for Disney—and her passion project—is Walt's Disneyland: A Walk in the Park with Walt Disney.

"With Marcy Carriker Smothers as co-author, Delicious Disney: Walt Disney World Recipes Stories from theMost Magical Place on Earth is not your typical Disney cookbook. The author of Eat Like Walt has filled this 50th anniversary cookbook with a lot of historical information. Unlike your typical Disney Parks cookbook, it features non-recipe informational sections and concept art from the restaurants, including lots of pieces by Disney Legend Dorothea Redmond. It’s easy to get swept away in these sections and they often leave you hungry for more.”—Laughing Place


“As a fan of Disney history, the chapters on “Gone but Not Forgotten” and “Eating and Imagination” were the most interesting as they offered a closer look at the role food plays in theming, and conversely, how theming plays a role in the presentation and marketing of food. While more recent additions to WDW like the Riviera Resort lack the same nostalgia or strong themes as old-school Disney, they do give the authors an opportunity to showcase the many culinary options now available to people with various dietary restrictions.”—AllEars