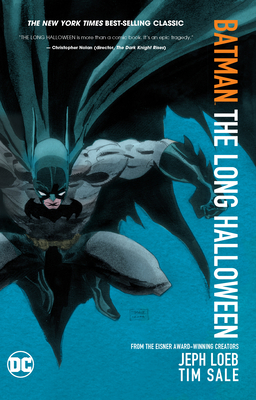 By Jeph Loeb, Tim Sale (Illustrator)
$29.99
Not available, maybe be backordered or out of print

Christmas. St. Patrick's Day. Easter. As the calendar's days stack up, so do the bodies littered in the streets of Gotham City. A murderer is loose, killing only on holidays. The only man that can stop this fiend? The Dark Knight. In a mystery taking place during Batman's early days of crime fighting, Batman: The Long Halloween is one of the greatest Dark Knight stories ever told.

Working with District Attorney Harvey Dent and Lieutenant James Gordon, Batman races against the calendar as he tries to discover who Holiday is before he claims his next victim each month. A mystery that has the reader continually guessing the identity of the killer, this story also ties into the events that transform Harvey Dent into Batman's deadly enemy, Two-Face.

The magnificent creative team of Jeph Loeb and Tim Sale reach their apex in Batman: The Long Halloween. This edition includes original 13-issue series as well as four additional story pages cut from the original series, which are presented fully colored and restored to their place in the story.  Also featured are sketches and an introduction by the director and writer of The Dark Knight Rises, Christopher Nolan and David Goyer.

Jeph Loeb is an Emmy award nominated and Eisner award winning writer/producer living in Los Angeles. In television, his many credits include Smallville, Lost and Heroes and in film, Teen Wolf and Commando. In comics, he is best known for his work with the supremely talented artist and partner-in-crime Tim Sale on Batman: The Long Halloween, Superman for All Seasons, Catwoman: When in Rome for DC as well as Daredevil Yellow, Spider-Man Blue and Hulk Gray for Marvel.

Tim Sale is not only the artist for the numerous collaborations with Jeph Loeb listed above, but has also worked on Deathblow, Batman: Legends of The Dark Knight, Grendel, Wolverine/Gambit: Victims, Billi 99, Amazon, and various other projects. He had the distinct honor of being the first creator chosen for the artist spotlight series Solo.

“Featuring Sale’s breathtaking art, which perfectly echoes the moodiness of the subject matter, The Long Halloween was an instant classic..." —Metro Toronto

"The Long Halloween stretches beyond the normal boundaries of comics to create a legendary story of onem man's crusade against an insane world." —IGN

"The Long Halloween is more than a comic book. It's an epic tragedy." —Christopher Nolan (Director The Dark Knight Rises)