George vs. George: The American Revolution As Seen from Both Sides (Paperback) 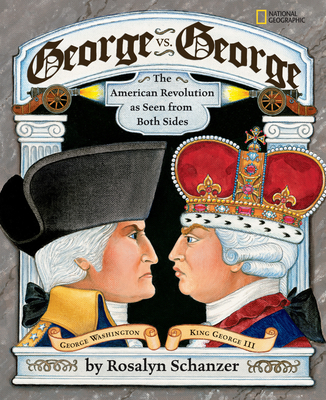 There are two sides to every story. Rosalyn Schanzer's engaging and wonderfully illustrated book brings to life both sides of the American Revolution.

The narrative introduces anew the two enemies, both named George: George Washington, the man who freed the American colonies from the British, and George III, the British king who lost them. Two leaders on different sides of the Atlantic, yet with more in common than we sometimes acknowledge. We are lead through their story, and the story of their times, and see both sides of the arguments that divided the colonies from the Kingdom. Was King George a "Royal Brute" as American patriots claimed? Or was he, as others believed, "the father of the people?" Was George Washington a scurrilous traitor, as all the king's supporters claimed? Or should we remember and celebrate him as "the father of his country?" Who was right? History teaches us that there are two sides to every story.

Rosalyn Schanzer's book is an accessible account of one the most vital periods in American history. It is also a timeless lesson in seeing history from different points of view. The author spent two years researching books, paintings, cartoons, and descriptions of Revolutionary times. She uses art, text, and first-hand accounts to illustrate how history should never be reduced to simplistic conflicts between the "good guys" and the "bad guys." Her illustrations, and her engaging quote bubbles, bring the Revolution to life again, and allow the characters of the period to speak for themselves. Through its lively text, detailed illustrations, and fully authenticated quotes, George vs. George shines fresh light on both sides of the story of our country's formative years.

Rosalyn Schanzer is the award-winning author and illustrator of numerous books for young readers. An avid photographer, swimmer and adventurer, Schanzer lives in Virginia.