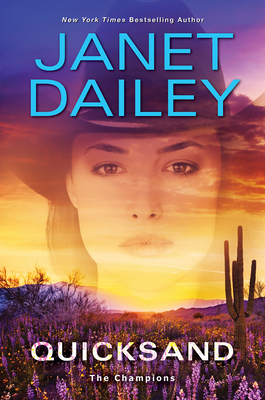 This is book number 3 in the The Champions series.

“Sizzles with suspense and sexual tension…Dailey keeps the pages flying with action and attraction.” –Publishers Weekly

The rugged, exciting new story from the New York Times bestselling author tells the tale of an Arizona family ranch in trouble, as the Champion sisters fight to keep their legacy bull-rearing operation strong, going head-to-head —and heart to heart—with some of the toughest men on the rodeo circuit.

Tess Champion knows better than to trust Brock Tolman, the rancher who once swindled her late father in a land deal. But with the Alamo Canyon Ranch in foreclosure, Tess is forced to accept Brock’s offer of a partnership. Brock claims he only wants to breed the Champion bloodline into his own herd. In exchange, he offers Tess one of his own young bulls. Soon enough, Quicksand is the rising star of the rodeo circuit, which only proves Tess is better at picking bulls than she is men. Because she’s way too tempted to surrender to her attraction to Brock, despite her certainty he’s only out to steal her family ranch . . .

It’s not until the tycoon’s private plane crashes in the wilderness, stranding him with Tess, that the truth of their relationship will come out. The Champion family’s future is on the line, but it’s Tess’s heart that will take the hit if she’s fallen for the wrong man . . .

Janet Dailey’s first book was published in 1976. Since then she has written more than 100 novels and become one of the top-selling female authors in the world, with 325 million copies of her books sold in nineteen languages in ninety-eight countries. She is known for her strong, decisive characters, her extraordinary ability to recreate a time and a place, and her unerring courage to confront important, controversial issues in her stories. To learn more about Janet Dailey and her novels, please visit JanetDailey.com or find her on Facebook at Facebook.com/JanetDaileyAuthor.

“Dailey’s third Champions romance sizzles with suspense and sexual tension as the relationship between reluctant business partners goes from professional to personal…Dailey keeps the pages flying with action and attraction. Fans of cowboy romances will be well pleased.”
—Publishers Weekly

“Janet Dailey gives the reader a behind-the-scenes look at what the life on the Professional Bull Riding circuit is like. She captures the danger of a bull rider. This is a suspenseful story that keeps you on the edge of your seat trying to figure out who is behind the sabotage at the ranch. A more than 8-second thrill ride that will have you captivated.”
—Fresh Fiction on Whirlwind

“One of the best in women’s lit…Dailey catches you from the first moment and never lets go.”
—Books N Kisses on Whirlwind

“Twists and surprises will keep the pages of this warm-hearted romance turning.”
—Publishers Weekly on Texas Forever

“Readers have been waiting more than a year for the next installment in author Janet Dailey’s New Americana series, and it has finally arrived. Letters from Peaceful Lane gives readers a deeply personal view of life in the Ozark Mountains.”
—Woman’s World

“Dailey gives readers a steadily paced novel showcasing the harsh realities that many second marriages undergo. The detailed character development shines…adding nuance to the contemporary romances. Fans of Susan Wiggs and Debbie Macomber will enjoy the third in Dailey’s New Americana series, which emphasizes that family struggles can be overcome, and love will always prevail.”
—Booklist on Letters from Peaceful Lane

“As captivating as it is swoon-worthy.”
—First for Women on Hart’s Hollow Farm