The Legend of Korra: Ruins of the Empire Library Edition (Hardcover) 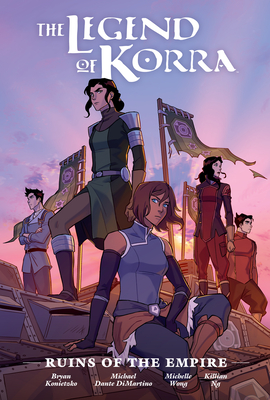 To secure lasting peace for the Earth Kingdom, Korra must trust an unlikely ally!

On the eve of its first elections, the Earth Kingdom's future is endangered by its past. As Kuvira works to reclaim her honor, the devious commander Guan undermines the peace Avatar Korra has established to take power for himself. Korra and Kuvira must learn to work together to ensure the future of the Earth Kingdom.

Enjoy the continuing Avatar adventures, now with a new sketchbook section and artist commentary! Written by series co-creator Michael Dante DiMartino and drawn by Michelle Wong (Goosebumps: Download and Die), with consultation by Bryan Konietzko, this is the official continuation of the beloved television series!

Collects The Legend of Korra: Ruins of the Empire Part One, Two, and Three.

Michael Dante DiMartino is an American animation director best known as the co-creator, executive producer, and story editor of the animated TV series Avatar: The Last Airbender and The Legend of Korra, both on Nickelodeon. He was born in Shelburne, Vermont. He studied at the Rhode Island School of Design with Bryan Konietzko, with whom he created Avatar. Before Avatar, Mike worked for twelve years at Film Roman, helping to direct King of the Hill, Family Guy, and Mission Hill in addition to his own animated short, Atomic Love.