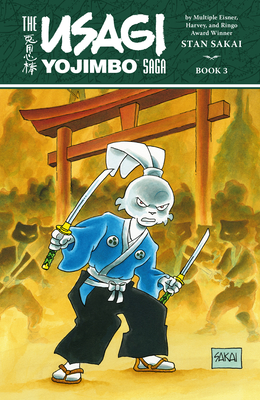 By Stan Sakai, Stan Sakai (Illustrator)
$29.99
Not available, maybe be backordered or out of print

Stan Sakai was born in Kyoto, Japan, grew up in Hawaii, and now lives in California with his children, Hannah and Matthew. He received a fine arts degree from the University of Hawaii and did further studies at the Art Center College of Design in Pasadena, California. His creation, Usagi Yojimbo, is the story of a samurai rabbit living in a feudal Japan populated by anthropomorphic animals. It first appeared in Albedo Comics in 1984. Since then, Usagi has appeared on television as a guest of the Teenage Mutant Ninja Turtles; and as toys, on clothing, in comic books, and in a series of trade paperback collections. In 1991, Stan created Space Usagi, the adventures of a descendant of the original Usagi, dealing with the samurai in a futuristic setting. Stan is also an award-winning letterer for his work on Sergio Aragonés's Groo: The Wanderer, the Spider-Man Sunday newspaper strips, as well as for Usagi Yojimbo. He is the recipient of a Parents' Choice Award, an Inkpot Award, multiple Eisner Awards, two Spanish Haxturs, an American Library Association Award, and a National Cartoonists' Society Division Award. Usagi Yojimbo Book 12: Grasscutter was used as a textbook in Japanese history classes at the University of Portland.

“Sixteenth-century Japan is never so entertaining as in Stan Sakai’s tales of Miyamoto Usagi.”—NPR’s Best Books of 2014

“I think Usagi Yojimbo is one of the most original, innovative, well-executed comic books anywhere to be found. Stan's style of artwork, his crisp incisive writing, and his thoroughly professional pacing, all done in a relaxed and absorbed manner, have provided comics with something so rarely seen in this field—a new literary and artistic approach to illustrated storytelling.”—Stan Lee

“Stan Sakai is able to spin a web of emotions with few words . . . nothing is lost as each sentence has a meaning and purpose towards the larger narrative. The art is equally gorgeously simple . . . a must read for any comic book fan.” —Graphic Policy