Lipstick Jihad: A Memoir of Growing up Iranian in America and American in Iran (Paperback) 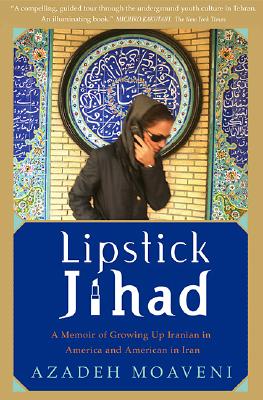 As far back as she can remember, Azadeh Moaveni has felt at odds with her tangled identity as an Iranian-American. In suburban America, Azadeh lived in two worlds. At home, she was the daughter of the Iranian exile community, serving tea, clinging to tradition, and dreaming of Tehran. Outside, she was a California girl who practiced yoga and listened to Madonna. For years, she ignored the tense standoff between her two cultures. But college magnified the clash between Iran and America, and after graduating, she moved to Iran as a journalist. This is the story of her search for identity, between two cultures cleaved apart by a violent history. It is also the story of Iran, a restive land lost in the twilight of its revolution.

Moaveni's homecoming falls in the heady days of the country's reform movement, when young people demonstrated in the streets and shouted for the Islamic regime to end. In these tumultuous times, she struggles to build a life in a dark country, wholly unlike the luminous, saffron and turquoise-tinted Iran of her imagination. As she leads us through the drug-soaked, underground parties of Tehran, into the hedonistic lives of young people desperate for change, Moaveni paints a rare portrait of Iran's rebellious next generation. The landscape of her Tehran -- ski slopes, fashion shows, malls and cafes -- is populated by a cast of young people whose exuberance and despair brings the modern reality of Iran to vivid life.

Azadeh Moaveni grew up in San Jose and studied politics at the University of California, Santa Cruz. She won a Fulbright fellowship to Egypt, and studied Arabic at the American University in Cairo. For three years she worked across the Middle East as a reporter for Time Magazine, before joining the Los Angeles Times to cover the war in Iraq. She lives in Beirut.