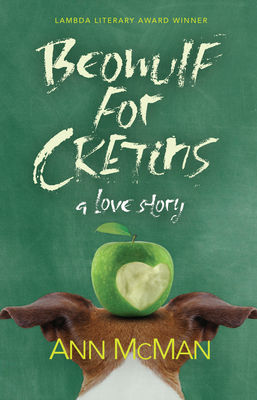 Beowulf for Cretins: A Love Story was awarded the 2019 Lambda Literary Award in the Lesbian Romance category.

English professor and aspiring novelist, Grace Warner spends her days teaching four sections of "Beowulf for Cretins" to bored and disinterested students at one of New England's "hidden ivy" colleges. Not long after she is dumped by her longtime girlfriend, Grace meets the engaging and mysterious Abbie on a cross-country flight. Sparks fly on and off the plane as the two strangers give in to one night of reckless passion with no strings attached, and no contact information exchanged.

Back home at St. Albans, the college rocks Grace's world when it announces the appointment of a new president, the first woman in its 165-year history. Cue Abbie--and cue Grace's collision course with a neurotic dog named Grendel, a fractious rival for tenure, and a woman called Ochre, in what very well might be Grace's last real shot at happiness.

This full-length novel reimagines and expands on the short story, "Falling From Grace," which was originally published in the award-winning story collection, Sidecar by Ann McMan.

ANN McMAN is the author of nine novels and two short story collections. Beowulf for Cretins: A Love Story was the recipient of a 2019 Lambda Literary Award. Ann also is a two-time Independent Publisher (IPPY) medalist, a seven-time winner of Golden Crown Literary Society Awards, and a laureate of the Alice B. Foundation for her outstanding body of work. She lives in Winston-Salem, North Carolina.