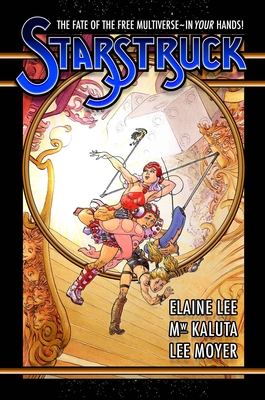 By Elaine Lee, Michael William Kaluta (Illustrator), Lee Moyer (Illustrator)
$34.99
Not available, maybe be backordered or out of print

The classic galaxy-spanning comic series has been a renowned stage play, audio drama, and now, the setting for a tabletop RPG actual play series!

This comprehensive Starstruck collection presents the material on which the Dimension 20 season is based in a grand, oversized edition. This beautiful book features some of the finest art ever put to paper by artist Michael Kaluta, including many pages that were never printed in the original run. Additionally, Kaluta painstakingly added approximately 20% of art to nearly every page to ensure the aspect ratio of the comic would be consistent and correct. The end result is unlike anything you’ve ever experienced—a head-spinning, synapse-snapping, soul-searing ride to a world like no other… the world of Starstruck!

Collects all 13 issues of the completely remastered series by Elaine Lee and Michael Kaluta! That's 360-pages of Starstruck and Galactic Girl Guides adventures, covers, pin-ups, glossary, postcards, and so much more.

Elaine Lee has had incarnations as an EMMY-nominated actress and playwright, artistic director of a theatre company (Wild Hair Productions), comic book writer and color artist, animation writer and story editor, video game writer, and art director for a music company. Specializing in sci-fi, fantasy and horror, Elaine has created six original comic series (BrainBanx, Skin Tight Orbit, The Transmutation of Ike Garuda). She is best known as writer/creator of Vamps. She has written animation scripts for Niolan, A-Film and Stardust Entertainment/Hallmark Entertainment.

Michael Kaluta's early professional art appeared in pulp magazines, and the earliest comic book work appeared in various Charlton Comics. DC Comics was the Kaluta's main focus of the 1970s; drawing interiors and, eventually, covers for their House of Mystery and House of Secrets comic books. Covers for both Detective Comics and Batman were the next step, and, eventually, the nod to draw DC Comics 1970s versions of Edgar Rice Burroughs' Carson of Venus and Pulp Icon, The Shadow. The new century saw a Madame Xanadu five-issue comic book story arc, and Chaos King, a special 30-page stand-alone book in Marvel's Chaos War.