That Woman: The Making of a Texas Feminist (Women in Texas History Series, sponsored by the Ruthe Winegarten Memorial Foundation) (Hardcover) 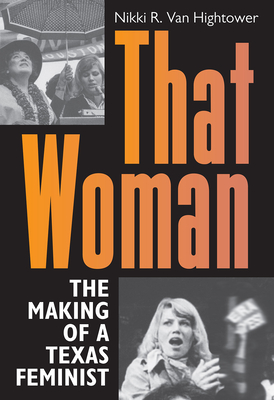 By Nikki R. Van Hightower, Nancy Baker Jones (Foreword by), Cynthia J. Beeman (Foreword by)
$25.00
Not available, maybe be backordered or out of print

When Nikki R. Van Hightower stepped into the position of Women’s Advocate for the City of Houston in 1976, she quickly discovered that she had very little real power. And when the all-male city council cut her salary to $1 a year after she spoke at a women’s rights rally, she gained full appreciation for just what she was up against.

Nonetheless, before the job was abolished altogether two years later, Van Hightower went on to help orchestrate the enormously successful 1977 US National Women’s Conference in Houston as part of the 1975 International Woman’s Year, to help found the Houston Area Women’s Center and establish its rape crisis and shelter programs, and to host a radio show where she publicly discussed issues of gender, race, and human rights.

This eye-opening memoir offers a window into the world of Texas history and politics in the 1970s, where sexual harassment was not considered discrimination, where women’s shelters did not exist, where no women were elected to city government, where women in the parks department were prohibited from working outdoors, and where women paid to use airport toilets while men did not. That world that may seem distant and slightly unreal today, so all the more reason to read Van Hightower’s journey as a feminist. Her story will remind us that while much has been achieved in gender relations and women’s rights, there is much that remains to be done.

NIKKI R. VAN HIGHTOWER is a founder and former executive director of the Houston Area Women’s Center. She has taught at the University of Houston, Lee College, and the Texas A&M University  School of Rural Public Health. Van Hightower retired as senior lecturer in political science at Texas A&M University, where she helped establish the women’s studies program. She lives in College Station, Texas.

“That Woman: The Making of a Texas Feminist is a highly personal account by an advocate and scholar who was on the front lines of the feminist movement in Houston, advocating to ratify the Equal Rights Amendment in Texas, bringing the 77’ National Women’s Conference to Houston, and establishing the Houston Area Women’s Center for survivors of domestic and sexual violence. This is more than a history book on the feminist movement in Texas, but a modern call to action for women today who are still fighting for full women’s equality in the United States.” —Congresswoman Sylvia Garcia
— Congresswoman Sylvia Garcia

“That Woman: The Making of a Texas Feminist is a window into a pivotal period in Houston history, set within the larger landscape of the feminist movement. Less a memoir than a clear-eyed and factual retrospective by a person who shaped, and was shaped by, a time of vast social change.”—Annise Parker, former Mayor of Houston
— Annise Parker

“In a highly personal, tremendously transparent, and illuminating book, Van Hightower details the rough paths she followed to become one of the state’s most impactful feminists. The book is a must read for women involved with volunteer organizations, advocates for more progressive public policies, academics whose research and teaching efforts focus on gender, and those considering or holding elective office.”—Susan A. MacManus, author of Florida’s Minority Trailblazers: The Men and Women Who Changed the Face of Florida Government
— Susan A. MacManus