Walking in Mud: A Navy SEAL's 10 Rules for Surviving the New Normal (Hardcover) 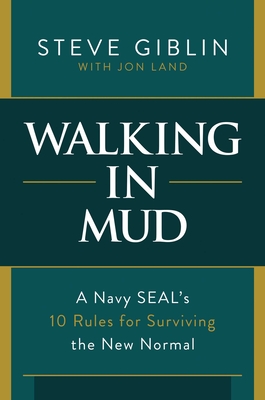 Drawing on his more than two decades as a Navy SEAL, Steve Giblin uses his own experiences to offer wisdom and counsel on how to cope with the new normal imposed by COVID-19.

During his first few weeks as a Navy SEAL, Steve Giblin found a simple, typewritten document left behind in an old desk drawer by the Team commanding officer, entitled “THE TEN ESSENTIAL QUALITIES OF AN UNDERWATER DEMOLITION MAN.”

That single page, and the maxims it contained, followed Steve wherever he was based during his twenty-six-year career with the SEALs—fourteen of those as part of the legendary strike force that took down Osama bin Laden. Steve still lives by those tenets today, coming to realize how it laid out a regimen not just for elite warriors, but also for the rest of us in our day-to-day lives.

Now Steve has applied them to this post-COVID-19 world we find ourselves living in, a new normal that will test both our resolve and our psyches as we’re challenged as we’ve never been before. Applying his own experiences as a Navy SEAL to these everyday rigors, Steve provides a prescription for both healing and thriving, a guide map to get to the other side better and stronger than we were at the beginning of a journey none of us signed up for.

We’re all walking in mud; thankfully, this book offers the best and surest strategy to lift ourselves from it.

Born and raised in Albuquerque, New Mexico, Navy SEAL Steve Giblin joined the Navy in 1981 at the age of seventeen for a four-year hitch that turned into a twenty-eight-year odyssey. His tenure included over two dozen overseas deployments as an operator for contingencies and named operations within the U.S. Special Operations Forces, namely Naval Special Warfare and Naval Special Warfare Development Group. He rose to the level of chief, assault team chief, and command master chief within the teams and then went on to work for Naval Special Warfare Command for nine more years as a contractor and civil servant before retiring in 2018. He now lives in upstate New York with his wife Barbara.

“A sobering, genuine, heartfelt approach that slows the world down enough to sharpen its spinning blur to crystal clarity. That’s what makes the book not only special and distinctive, but also stunningly effective in its means and message. Far from just another lifestyle entry, Walking in Mud is destined to stand alongside the likes of Harold Kushner’s When Bad Things Happen to Good People and Stephen Covey’s The 7 Habits of Highly Successful People as an enduring, instant classic.”
— Reader’s Digest