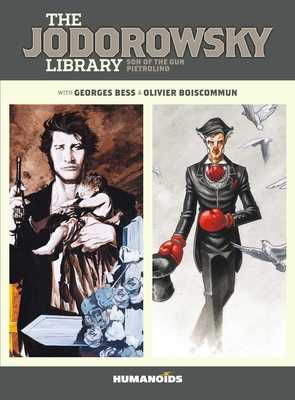 The Jodorowsky Library: a collection of deluxe matching volumes showcasing the iconic works of the legendary Alejandro Jodorowsky.

Included in this volume are the modern-day spiritual western SON OF THE GUN (illustrated by Georges Bess) and the heartwrenching tale of a mime in Nazi-occupied France, PIETROLINO (illustrated by Olivier Boiscommun).

Georges Bess is a French artist, best known for his collaboration with Alexandro Jodorowsky. He moved to Sweden in the early 1970s and it is there that he did his first artistic jobs under his own name or under the pseudonyms Tideli and Nisseman. He cooperated with the Swedish “Mad” magazine, and from 1977 to 1987, drew stories with “The Phantom.” In the early 1980s, Bess accidentally traveled to Tibet and became very impressed with the country. It was shortly thereafter that he met and began collaborating with Jodorowsky, in what would become a long and successful collaborative partnership.

Born in 1971, Olivier Boiscommun studied Graphic Arts in Paris. Initially a fashion designer, he switched to studying Fine Arts in Angoulême in 1993. He created a story for the Enfants du Nil anthology in 1994, followed by a small black and white album at Le Cycliste. He worked on the animated film Bamboo Bears before joining Delcourt publishers, where he began the Troll series with Joann Sfar and Jean-David Morvan. In 2001, he produced Anges with writer Dieter, as well as creating The Book of Jack and The Book of Sam with writer Denis-Pierre Filippi.