American Girl: Around the World Cookbook: Delicious Dishes from Across the Globe (Hardcover) 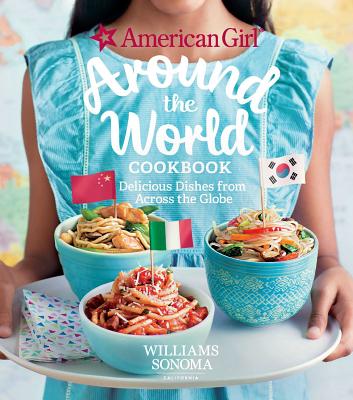 Featuring more than 50 recipes for kid-friendly dishes from different countries, American Girl Around the World Cookbook will inspire young chefs to taste and learn about new cuisines while perfecting kitchen skills.

In this fifth cookbook from Williams Sonoma and American Girl, aspiring cooks will expand their culinary knowledge and palate—and discover a world of savory and sweet delicacies like mini meatballs from Sweden; fresh spring rolls from Vietnam; pad thai from Thailand; tikka masala from India; paella from Spain; kiwi and berry pavolvas from New Zealand; sticky toffee pudding from Great Britain, and so much more.

The easy-to-follow recipes are organized by type and span the globe—from France to Brazil, Turkey to Argentina, Italy to India and beyond—giving kid cooks an opportunity to learn how people eat all over the world. An illustrated map with flags, colorful illustrations featuring passports, and party ideas for sharing these worldly recipes with friends round out the collection.

American Girl is a premium brand for girls and a wholly owned subsidiary of Mattel, Inc. the world’s leading toy company. Since its inception in 1986, American Girl has been devoted to celebrating girls ages 3 to 12 through age-appropriate, high-quality dolls and accessories, books, clothes, movies, and unforgettable experiences. Best-selling lines include Truly Me™, Girl of the Year™, Bitty Baby™, and the classic historical character line BeForever.

Since its founding by Chuck Williams in 1956, the Williams Sonoma brand has been bringing people together around food and celebrating the art of home cooking.

This globally minded addition to a series of American Girl cookbooks features ambitious recipes for budding foodies. Passport stamp graphics introduce four sections that explore snacks, soups and sandwiches, rice and noodle dishes, and beverages and desserts. Gerulat’s color photographs feature multicultural girls preparing and enjoying the meals, along with images of the completed dishes. The more than 50 recipes include Moroccan-spiced chicken skewers, cheese fondue, potato latkes, Mexican chocolate pudding, Hawaiian shave ice, and sushi. Each recipe includes a brief description of its origins (“Savory turnovers called empanadas are popular snacks in Latin America. They’re super-portable, so they’re the perfect finger food for a picnic or a party”). With warmth and enthusiasm, the editors urge readers to broaden their palates and their curiosity about other cultures. Ages 8–12. (Apr.)
— Publishers Weekly