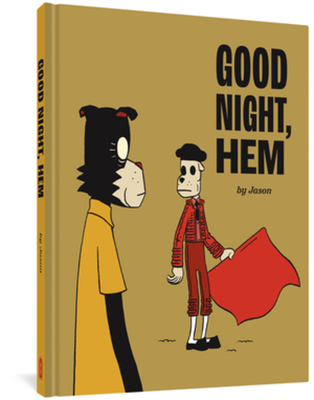 By Jason
$19.99
Not available, maybe be backordered or out of print

Mixing fact and fiction, Jason has imaginatively recreated one of America's greatest and most controversial writers of the 20th century.

Jason delivers an at times whimsical but overwhelmingly melancholic portrait, revealing reverence and sympathy for Hemingway without ignoring the author’s shortcomings. One of the best releases of 2021.
— Library Journal (starred review)

Jason continues to be one of the best cartoonists working anywhere.
— Publishers Weekly

Mixing fact and fiction, no other artist has had as much fun or provided as much
insight into the Hemingway mythos as Jason.
— Robert K. Elder, Hemingway in Comics

Unlike traditional literature, comix, and particularly Jason's simple style, allow the reader to fully move into the space provided. Slowly, but altogether too fast, you look back and see an entire book, and an entire life, has gone past.
— Time Magazine

The legend of Ernest Hemingway is given a laconic, witty spin in this quirky three-part biography with fantastical elements from Eisner Award–winning Norwegian cartoonist Jason.
— Publishers Weekly

All told, it's a hell of a lot of fun but it's also tremendously thoughtful and sincere too. We might even go so far as to claim it's our favorite Jason to date.
— Bookmunch