In My Dreams I Hold a Knife: A Novel (Paperback) 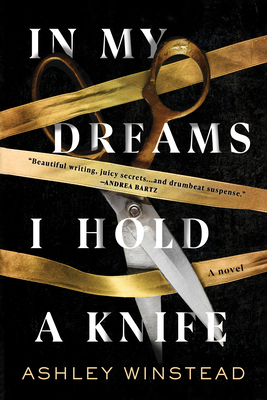 "[A] mordant debut novel....examines what it means to covet the lives of others, no matter the cost."—The New York Times

Ten years after graduation, Jessica Miller has planned her triumphant return to her southern, elite Duquette University, down to the envious whispers that are sure to follow in her wake. Everyone is going to see the girl she wants them to see—confident, beautiful, indifferent. Not the girl she was when she left campus, back when Heather Shelby's murder fractured everything, including the tight bond linking the six friends she'd been closest to since freshman year.

But not everyone is ready to move on. Not everyone left Duquette ten years ago, and not everyone can let Heather's murder go unsolved. Someone is determined to trap the real killer, to make the guilty pay. When the six friends are reunited, they will be forced to confront what happened that night—and the years' worth of secrets each of them would do anything to keep hidden.

Told in racing dual timelines, with a dark campus setting and a darker look at friendship, love, obsession, and ambition, In My Dreams I Hold A Knife is an addictive, propulsive read you won't be able to put down.

Ashley Winstead directs communications for a national philanthropy. She holds a Ph.D. in contemporary American literature and a B.A. in English and Art History. She lives in Houston, TX.

"Nostalgic and sinister, In My Dreams I Hold a Knife whisks the reader back to college. Glory days, unbreakable friendships, all-night parties and a belief that the best in life is ahead of you. But ten years after the murder of one of the East House Seven, the unbreakable bonds may be hiding fractured secrets of a group bound not by loyalty but by fear. Twisty and compulsively readable, In My Dreams I Hold a Knife will have you turning pages late into the night, not just to figure out who murdered beloved Heather Shelby, but to see whether friendships forged under fire can ever be resurrected again." - Julie Clark, New York Times bestselling author of The Last Flight

"Fans of The Secret History, Ruth Ware, and Andrea Bartz will devour this dark academic thriller with an addictive locked-room mystery at its core. Ten years after an unsolved campus murder, the victim's best friends reunite, knowing one might be a monster--but is anyone innocent? Over the course of a single shocking night, Ashley Winstead peels back lie after lie, exposing the poisoned roots of ambition, friendship, and belonging itself. An astonishingly sure-footed debut, In My Dreams I Hold a Knife is the definition of compulsive reading. The last page will give you nightmares." - Amy Gentry, bestselling author of Good as Gone, Last Woman Standing, and Bad Habits

"Beautiful writing, juicy secrets, complex female characters, and drumbeat suspense—what more could you want from a debut thriller? I'm Ashley Winstead's new biggest fan. If you liked Marisha Pessl's Neverworld Wake or Laurie Elizabeth Flynn's The Girls Are All So Nice Here, trust me—you will love this." - Andrea Bartz, bestselling author of The Lost Night and The Herd

"An unsolved murder, dark secrets and dysfunctional college days, all wrapped up in a twisty plot that will keep you flipping pages." - Darby Kane, #1 Internationally bestselling author of Pretty Little Wife

"With its compelling puzzlebox structure and delightfully ruthless cast of characters, this twisty dark academia thriller will have you flipping pages like you're pulling an all-nighter to cram for a final. In My Dreams I Hold a Knife is required reading for fans of Donna Tartt's The Secret History and Amy Gentry's Bad Habits." - Layne Fargo, author of They Never Learn

"Tense, twisty and packed with shocks, Ashley Winstead's assured debut dares to ask how much we can trust those we know best—including ourselves. A terrific read!" - Riley Sager, New York Times bestselling author of Home Before Dark

"Deeply drawn characters and masterful storytelling come together to create an addictive and riveting psychological thriller. Put this one at the very top of your 2021 reading list." - Liv Constantine, internationally bestselling author of The Last Mrs. Parrish