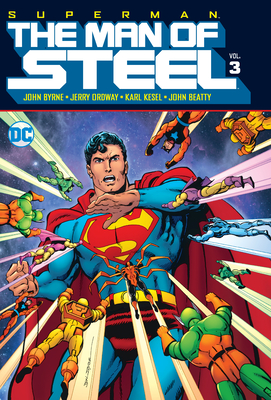 The Man of Steel's mettle is tested!

Renowned writer and artist John Byrne's bold reimagining of Superman is regarded as one of the greatest comics runs in history. Joined by lauded industry talents such as Jerry Ordway, Karl Kesel, and John Beatty, Byrne pitted the Last Son of Krypton against a variety of strange foes that evoked the nostalgia of many of Superman's early adventures.

In these continuing tales, Superman aids a mysterious young woman who holds a dark secret, fights a gargantuan primate across Metropolis, deals with superhero possessing a supersize ego, and meets one of his most lethal foes yet—the Silver Banshee. Even the hamlet of Smallville isn't safe from danger when the intergalactic war between the Manhunters and the Guardians of the Universe comes to town during the Millennium crossover event.

Born in England and raised in Canada, John Byrne discovered superheroes through The Adventures of Superman on television. After studying at the Alberta College of Art and Design, he broke into comics first with Skywald and then at Charlton, where he created the character Rog-2000. Following his tenure at Charlton, Byrne moved to Marvel, where his acclaimed runs on The Uncanny X-Men and Fantastic Four soon made him one of the most popular artists in the industry. In 1986, he came to DC to revamp Superman from the ground up, and since then he has gone on to draw and/or write every major character at both DC and Marvel.