Doctor Who: Time Lord Victorious: Defender of the Daleks (Paperback) 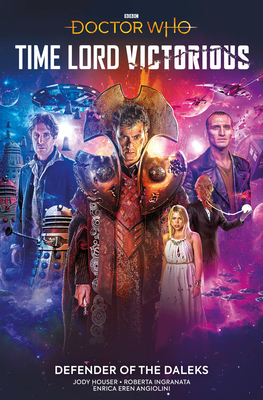 An incredible new graphic novel starring the Tenth Doctor, played by fan-favorite David Tennant, and features his mortal enemies, the Daleks, for the first time ever in TITAN COMICS! This story ties in with the BBC's multi-platform event: Time Lord Victorious!

After awaking in an alternate reality where the Time War never took place, the Tenth Doctor is recruited by his deadly nemeses, the Daleks, to defeat a terror that even they fear. Can the Doctor make peace with his enemies in order to stop this unknown monster from the Dark Times as it seeks to extinguish all life in the universe?!

This brand new time-travelling tale is part of the BBC's multi-platform event that connects across all Doctor Who publishing media, including books, audio dramas, an escape room and much more!

Roberta Ingranata is an Italian comic artist from Milan. She has worked for various pulishers across Europe and the US. After working on Robyn Hood, she went on to become the regular artist on Witchblade and Titan's Doctor Who - the Thirteenth Doctor.

"Some of the best Who interiors that Titan has ever published, Ingranata's work on Doctor Who: Time Lord Victorious recreates the intense energy of the Tenth Doctor with accuracy, style, and whimsy" - Bleeding Cool

"Plenty of mystery and intrigue in evidence, and more death traps than you could shake a Dalek’s sucker stick at" - Set The Tape

"[The] characterisation of Tennant’s Tenth Doctor is spot on. Everything from his voice down to his swashbuckling nature has been expertly captured ... a great start to Time Lord Victorious. 10/10" - Flickering Myth

"Right from the first page of this comic, you know this story’s going to be epic ... a classic hero’s journey tale full of space monsters, something Doctor Who does best no matter the medium" - Multiversity Comics

"What a fantastic opener to this massive storyline. Jody Houser’s script and dialogue throughout was just top class, her Tenth Doctor is just pitch perfect ... Ingranata also captures the essence of Tennant’s Doctor, his mannerisms and body language, perfectly 5/5" - Nerdly

“Captures the essence of the Doctors” - Comic Crusaders

"With artwork that feels alive and packed with a real sense of movement and emotion, Ingranata is a force of nature" - Bleeding Cool