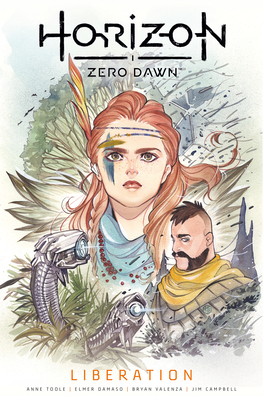 Horizon: a far-future Earth full of epic natural beauty and forgotten ruins, where awe-inspiring, animal-like machines are the dominant species and humans struggle to survive in pre-industrial tribes.

Set during the events of Horizon Zero Dawn, Erend and Aloy are on the hunt for the killer of an important member of the Oseram tribe, fending off deadly machines along the way. As the hunt progresses, Erend reveals the sweeping tale of the liberation of Meridian, and how his sister, Ersa, Captain of the Carja Vanguard, was murdered.

Anne Toole, winner of Writers Guild Award, was one of the writers on the Horizon Zero Dawn video game. The game earned critical acclaim for its writing and won the Golden Joystick Award for Best Storytelling. She also created the hundred-episode series Alles Liebe, Annette and wrote for the Emmy-winning webseries The Lizzie Bennet Diaries. She also contributed writing to the videogame The Witcher.

Elmer Damaso has been working as a manga and comic book artist for almost 20 years, and has previously worked on titles such as Speed Racer, Hero Factory, Kingdom of Assassins, and Robotech/Voltron.

“The Art Is Gorgeous” - Comical Opinions

“The artist allowed each character to stand out when it was their time to shine, really letting us see what they are feeling, or how battered they might be after battle.” - CGMonline

"Will draw in connoisseurs of post-apocalyptic adventure regardless of their familiarity with the video game. A gallery of the original comic book issue covers rounds out this excellent and exciting graphic novel.​"  - Wisconsin Book Review​