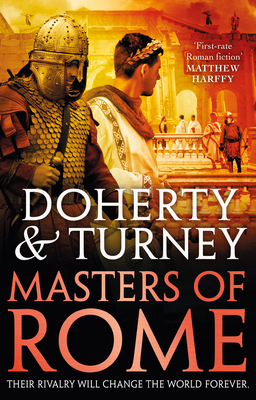 This is book number 2 in the Rise of Emperors series.

Their rivalry will change the world forever.

As competition for the imperial throne intensifies, Constantine and Maxentius realise their childhood friendship cannot last. Each man struggles to control their respective quadrant of empire, battered by currents of politics, religion and personal tragedy, threatened by barbarian forces and enemies within.

With their positions becoming at once stronger and more troubled, the strained threads of their friendship begin to unravel. Unfortunate words and misunderstandings finally sever their ties, leaving them as bitter opponents in the greatest game of all, with the throne of Rome the prize.

It is a matter that can only be settled by outright war...

"A page turner from beginning to end . . . A damn fine read" —Ben Kane, author of Lionheart

"The Rise of Emperors series is first-rate Roman fiction. Doherty and Turney each breathe life into their respective characters with insight and humanity." —Matthew Harffy, author of Wolf of Wessex

"A nuanced portrait of an intriguing emperor." —The Times (on Turney's Commodus)

"A meticulously researched and vivid reimagining of an almost forgotten civilisation." —Douglas Jackson, author of Hero of Rome (on Doherty's Empires of Bronze)

"An intriguing and highly polished piece of historical fiction." —James Tivendale from Grimdark (on Sons of Rome)

Simon Turney is from Yorkshire and, having spent much of his childhood visiting historic sites, he fell in love with the Roman heritage of the region. His fascination with the ancient world snowballed from there with great interest in Rome, Egypt, Greece, and Byzantium. His works include the Marius' Mules and Praetorian series, as well as the Tales of the Empire series and The Damned Emperor series. www.simonturney.com @SJATurney

Gordon Doherty is a Scottish author, addicted to reading and writing historical fiction. Inspired by visits to the misty Roman ruins of Britain and the sun-baked antiquities of Turkey and Greece, Gordon has written tales of the later Roman Empire, Byzantium, Classical Greece and the Bronze Age. His works include the Legionary, Strategos and Empires of Bronze series, and the Assassin's Creed tie-in novel Odyssey. www.gordondoherty.co.uk @GordonDoherty