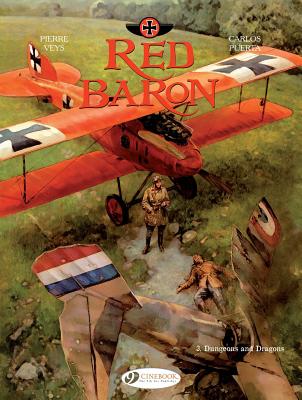 By Pierre Veys, Carlos Puerta (Illustrator)
$15.95
Not available, maybe be backordered or out of print

This is book number 3 in the Red Baron series.

It's a war on two fronts that begins for the Red Baron. Manfred Von Richthofen is now flying over Russia, where his missions escorting heavy bombers or strafing ground troops are doing considerable damage. So much so that he's eventually offered the opportunity to transfer to the Western Front and pit himself against the best British fighters. But a nasty surprise is waiting for him: among his new colleagues is his old enemy Prince Friedrich. The foe in the air may not be the most dangerous one...

Pierre Veys began his career as a comedy writer for TV and radio, before transitioning to comics. He wrote many humorous series, including a parody of "Blake & Mortimer," and several episodes of "Billy & Buddy" with Laurent Verron, successor to the original author Roba. Carlos Puerta is a Spanish artist specialized in historical series. With inspirations ranging from US comic legends such as Will Eisner to 19th century Spanish artists, he carefully researches each new story like a trained historian.