All Quiet on the Western Front (Hardcover) 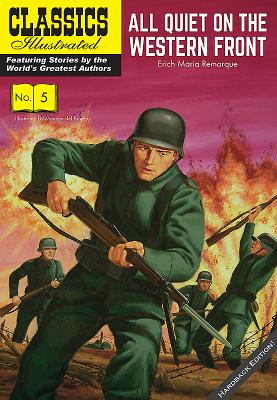 By Erich Maria Remarque, Maurice Del Bourgo (Illustrator), Kenneth W. Fitch
$12.95
Not available, maybe be backordered or out of print

Narrated by Paul B umer, a young man fighting on the French front, Erich Maria Remarque's "All Quiet on the Western Front" describes the extreme circumstances of the German soldiers of the First World War. Paul and his friends volunteered to join the army after being swept up by the patriotic speeches of their teacher. But after undergoing several weeks of harsh training and experiencing the unimaginable horrors of life on the front, they have realised that the truth of warfare is not honourable, but terrible. Classics Illustrated tells this wonderful tale in colourful comic strip form, offering an excellent introduction for younger readers. This edition also includes a biography of Erich Maria Remarque, theme discussions and study questions, which can be used both in the classroom and at home to further engage the reader in the story. The Classics Illustrated comic book series began in 1941 with its first issue, Alexandre Dumas's The Three Musketeers, and has since included over 200 classic tales released around the world. This new Vintage Replica hardback edition is part of a continuing effort to make Classics Illustrated available to all, be they young readers just beginning their journeys into the great world of classic literature, or collectors who have fond memories of this much loved comic book series.