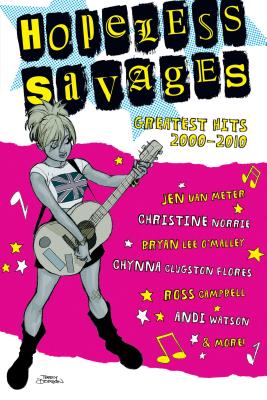 By Jen Van Meter, Christine Norrie (Illustrator), Bryan Lee O'Malley (Illustrator)
$19.99
Not available, maybe be backordered or out of print

It's the total swerval return of the First Family of Punk! Dirk Hopeless and Nikki Strange went from the parties, touring, and recording studios of rock stardom to the quiet of the suburbs, but that's no reason they can't still be themselves. Join Dirk and Nikki, along with their kids Rat, Arsenal, Twitch, and Zero as they bounce their way through kidnapping plots, first love, and international intrigue in this massive collection of the Eisner Award-nominated series!

Bryan Lee O'Malley is a Canadian cartoonist best known for the bestselling, award-winning Oni Press series "Scott Pilgrim" (2004-2010). "Scott Pilgrim" was adapted into a critically-acclaimed major motion picture (from Universal) and video game (from Ubisoft) in 2010. O'Malley lives in Los Angeles, where he continues to make comics.