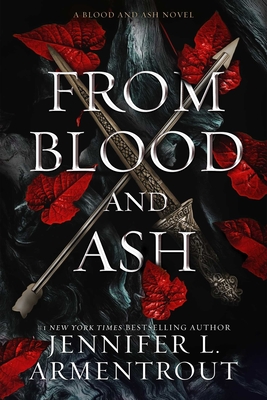 This is book number 1 in the Blood and Ash series.

Captivating and action-packed, From Blood and Ash is a sexy, addictive, and unexpected fantasy perfect for fans of Sarah J. Maas and Laura Thalassa.

Chosen from birth to usher in a new era, Poppy's life has never been her own. The life of the Maiden is solitary. Never to be touched. Never to be looked upon. Never to be spoken to. Never to experience pleasure. Waiting for the day of her Ascension, she would rather be with the guards, fighting back the evil that took her family, than preparing to be found worthy by the gods. But the choice has never been hers.

The entire kingdom's future rests on Poppy's shoulders, something she's not even quite sure she wants for herself. Because a Maiden has a heart. And a soul. And longing. And when Hawke, a golden-eyed guard honor bound to ensure her Ascension, enters her life, destiny and duty become tangled with desire and need. He incites her anger, makes her question everything she believes in, and tempts her with the forbidden.

Forsaken by the gods and feared by mortals, a fallen kingdom is rising once more, determined to take back what they believe is theirs through violence and vengeance. And as the shadow of those cursed draws closer, the line between what is forbidden and what is right becomes blurred. Poppy is not only on the verge of losing her heart and being found unworthy by the gods, but also her life when every blood-soaked thread that holds her world together begins to unravel.

#1 New York Times and #1 International Bestselling author Jennifer L. Armentrout lives in Shepherdstown, West Virginia. All the rumors you’ve heard about her state aren’t true. When she’s not hard at work writing, she spends her time reading, watching really bad zombie movies, pretending to write, hanging out with her husband, her Border Jack—Apollo, Border Collie—Artemis, six judgmental alpacas, two rude goats, and five fluffy sheep. In early 2015, Jennifer was diagnosed with retinitis pigmentosa, a group of rare genetic disorders that involve a breakdown and death of cells in the retina, eventually resulting in vision loss, among other complications. Due to this diagnosis, educating people on the varying degrees of blindness has become another passion for her, right alongside writing, which she plans to do for as long as she can.

Her dreams of becoming an author started in algebra class, where she spent most of her time writing short stories...which explains her dismal grades in math. Jennifer writes young adult, paranormal, science fiction, fantasy, and contemporary romance. She is published with Tor, HarperCollins Avon and William Morrow, Entangled Teen and Brazen, Disney/Hyperion, Harlequin Teen, and Blue Box Press; and PassionFlix recently made her Wicked series into a feature film. Jennifer has won numerous awards, including the 2020 Goodreads Choice Award in Romance for her adult fantasy, From Blood and Ash. She has also written Adult and New Adult contemporary and paranormal romance under the name J. Lynn.