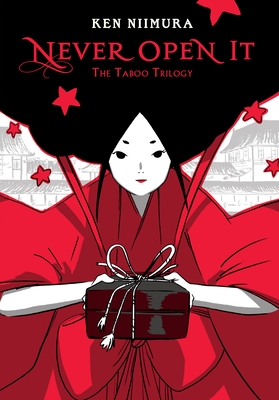 By Ken Niimura
$20.00
Not available, maybe be backordered or out of print

Never Open It: The Taboo Trilogy is a collection of three stories from Ken Niimura that are rooted in well-known Japanese folk tales, such as Urashima Taro and The Crane Wife. Each story delves into the concept of the taboo, asking questions such as “Why are these rules meant to be followed?” and “Who and why sets these rules?” Taking inspiration from the Japanese folk tales told to Ken Niimura as a child and combining them with his unique and captivating art style, Never Open It: The Taboo Trilogy is a must read graphic novel for fans of beautiful literary comics.

Ken Niimura is a Spanish-Japanese cartoonist and illustrator.

He is the author of Henshin (2014), Umami (2018, winner of the Eisner Award to the Best Digital Comic) and Never Open It(2021). He is also the co-creator of I Kill Giants written by Joe Kelly (2009, International Manga Award) which was adapted into a film in 2019 starring Zoe Saldana.

Ken Niimura’s work has been translated into twelve languages. He lives and works in Tokyo.