An Evening of Mystery with Lynn Miller and Pamela Ferguson-- on Zoom!

MURDERS IN AUSTIN? LITERARY AND CONTEMPORARY VARIATIONS TO SUIT ALL READERS

Please join us, virtually, in welcoming back two dear friends of BookWoman- Lynn Miller and Pamela Ferguson for a delightful evening of Mystery!

Lynn C. Miller’s new novel is The Unmasking, her fourth; she’s excited to be doing another event at BookWoman and is pleased to be joined by current Austinite, Pamela Ellen Ferguson. Lynn recalls fondly the 27 years that she spent in Austin. The authors will be available for questions and discussion after the presentation. Zoom info below.

The Unmasking continues with three friends at the fictional Austin University as they investigate their dean’s death at a festival of women’s performance in Silver City, New Mexico. Best friends Bettina, Miriam, and Fiona are shocked when their dean of liberal studies dies in a single-car accident amid accusations of mishandling university funds. They suspect murder, especially after learning that the dean's estranged wife will inherit three million dollars. Events take a surprising turn when they travel from Austin, Texas, to a Chautauqua performance in Silver City, New Mexico, where they join several others, some with questionable motives, including the dean's wife and her lover. In the close confines of the lodge, the group brings to life remarkable women from history--including Victoria Woodhull, Gertrude Stein, Edith Wharton, Mabel Dodge Luhan, and Virginia Woolf. But when one woman is kidnapped and another disappears, the friends' lives are forever changed as they realize that the masks we wear often hide chilling truths.

Lynn Miller has performed and directed the work of women writers including Gertrude Stein, Edith Wharton, Victoria Woodhull, and Katherine Anne Porter. She directed many performances while in Austin. Her third novel, The Day After Death, was named a 2017 Lambda Literary Award. A former professor of Theater and Dance at the University of Texas at Austin, she is co-publisher of Bosque Press and lives in Albuquerque, NM.

Pam Ferguson's CROSSING LINES  is a fast paced thriller set in Austin and at the Border, involving  architect-turned-sleuth Buzzy McBride's relentless efforts to resolve a grisly murder after a head tumbles out of one of her pecan trees at Halloween. Buzzy suspects some innocent kid was butchered as revenge for a story her hard-hitting late journalist brother wrote about the cartels, and races to Del Rio to locate her nephew in case he was the intended target. She unravels a sad story involving her polyamorous brother linked to a West Texas/Mexico property dispute rooted in the Spanish colonial era. Buzzy is helped by an eccentric cast of characters, Grace Colvin, her African American lawyer: Sister Colleen, a feisty Irish nun who runs Border sanctuaries for undocumented youth: Isabel Ramirez, a Del Rio café owner with eyes on both sides of the Border: and Austin PD homicide detective, the poetic Eddie Zuniga.

Pam Ferguson calls Austin home after living and working in a dozen world capitals as an investigative journalist and award winning global teacher of Asian Bodywork Therapy (ABT). A staunch supporter of BookWoman, Pam has facilitated various author presentations. CROSSING LINES is her 11th book after an eclectic array of topics ranging from Mideast politics, to architecture, to political thrillers, to textbooks in her field of Asian Medicine, to a work of fiction for children titled  Sunshine Picklelime. She is AOMA's former Dean of ABT.

Dial by your location

This Zoom session is set to open 15 minutes early, 6:45 pm, to give attendees time to resolve connection issues before the meeting begins at 7 pm. Zoom will place attendees in a Waiting Room and a host will admit.  Please be patient. 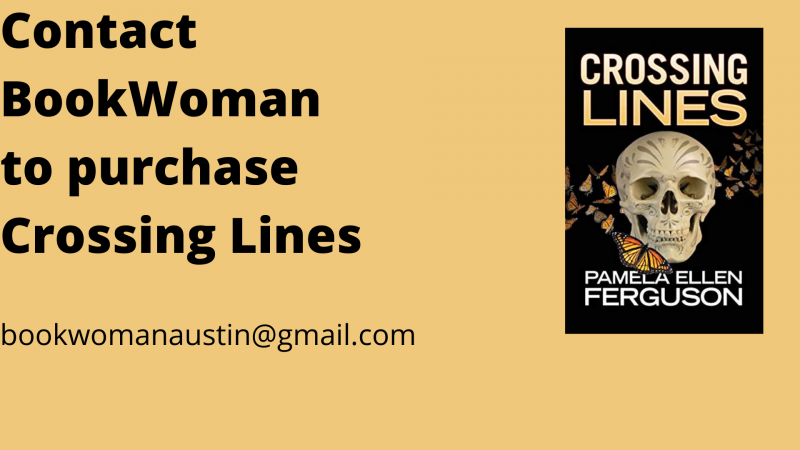 The Day After Death (Paperback)

Death of a Department Chair: A Novel (Paperback)