In late September, 2011, Spike and her partner, Warren*,
set out on what was supposed to be a straightforward Texas-to-Maine
excursion. Instead, thanks to myriad factors beyond their control, the
trip turns into an adventure resembling a cross between Gilligan's
Island and a reality show where pairs of travelers race the clock and
each other to reach their destination, growing increasingly frantic as
they go. Adding to the high jinks of this journey: ongoing gender,
cultural, and attitude differences between Spike and Warren, which at
some turns provide pant-peeing hilarity, and in other moments foster
intricate revenge fantasies. In other words, two people stuck together
24-7, accidentally proving the theory that everyone needs alone time
sometimes.

Culminating in a rush of events including a moose spotting, a full
bladder, an empty wallet, and an escalating argument at the Canadian
border, The Maine Event provides a funny/painful/brutally honest glimpse
into the love-filled, self-chosen insanity also known as "being in a
relationship." All this, set to a backdrop that includes late night
parking lots under eerie golden arches, long stretches of back roads
accented with that riot of color called New England Fall, and Monhegan
Island, a stunning little speck of land bobbing in the Atlantic Ocean,
an hour off the coast of Maine, a magic oasis punctuated with Fairy
Houses, sparkling with sea glass, enrobed in breathtaking cliffs, and
peopled by an entertaining cast including laconic local lobsterfolk and
chatty sea-loving travelers.

* Of course that's not his real name. 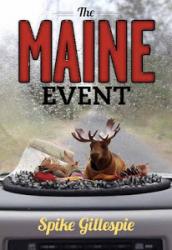